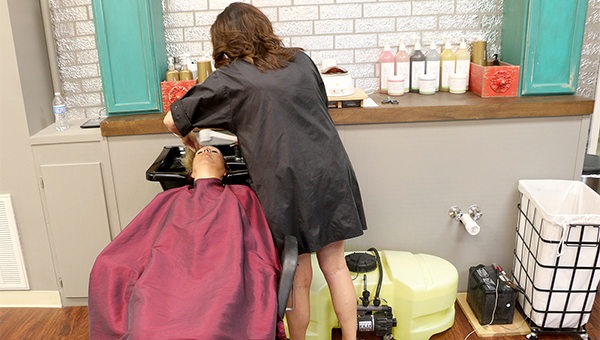 In the midst of last week’s water outage in Vicksburg, an outage that would last through Saturday, Rhonda Rowland got worried.

“When I saw on Facebook that we were going to be without water, I started panicking,” Rowland, who owns Serendipty Salon on Halls Ferry Road, said. “I couldn’t afford to be out of work that long”

So, in an effort to stay up and running, she and her mother decided they would just go out and buy up as much bottled water as they could find, that was until her dad, Pat Daughtry, came up with a better idea.

“My dad had a tank in his shop, and it had a pump already attached to it, so he hooked it up to a battery, and then he took the spray hose off of his RV and hooked up a shower head to it,” Rowland said.

Throughout the outage, the makeshift water tank sat right beside Rowland’s shampoo bowl and allowed her to work like nothing was wrong.

Rowland said the water was a bit cooler than her clients were used to. One of her customers, Cindy Park, said it was worth it.

“I was sick with the stomach virus and missed my last appointment, and I did not want to miss this one,” Park said Thursday as she sat down to get her hair washed.

The city of Vicksburg remains under a boil water advisory and some customers of the Culkin Water District are still... read more