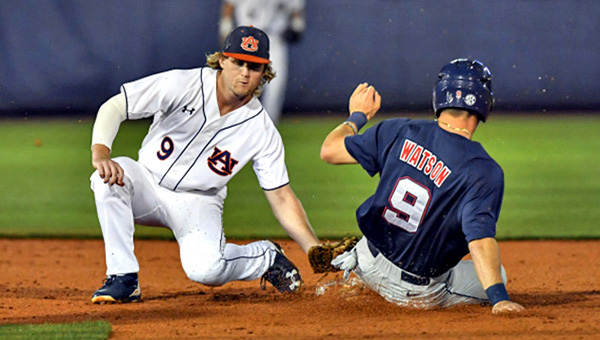 HOOVER, Ala. (AP) — Ole Miss had a long wait to finally get on the field Tuesday in the Southeastern Conference Tournament.

It was nothing compared to the week ahead.

Blake Logan homered and Casey Mize pitched six strong innings of relief to lift Auburn over Ole Miss 5-4 in the opening-round, single-elimination portion of the tournament.

The game between the Nos. 8 and 9 seeds — which started 3 1/2 hours late because of earlier games running long and rain delays — was largely viewed as an elimination game for the NCAA Tournament as well. Both teams entered with RPI rankings in the 30s and low 40s, squarely on the bubble for an at-large bid.

Auburn (35-22) also won two out of three from Ole Miss (32-25) in the last regular-season series last weekend. Ole Miss fell to 17-17 this season against ranked teams.

“We’re getting ready for a regional in a few weeks,” said Ole Miss outfielder Will Golsan, who was 2-for-3 with two runs scored. “Just go about our business in practice and be ready for it.”

Auburn will face top-seeded Florida on Wednesday, when the tournament switches to double elimination.
Day two of the tournament kicked off at 9:30 a.m., with Mississippi State playing Georgia in an elimination game that was originally scheduled for Tuesday night but postponed a day because of the various delays.

The winner of the Mississippi State vs. Georgia game will play the early game again Thursday, against Arkansas.

The other games Wednesday are Kentucky vs. South Carolina at 1 p.m., LSU vs. Missouri at 4:30, and Auburn-Florida at 8.

While those teams soldier on, Ole Miss is heading home.

The Rebels watched an early 2-0 lead evaporate when Auburn scored three times in the fourth inning. After tying it in the top of the sixth, Logan’s solo home run in the bottom half gave the Tigers the lead for good. They added another run in the eighth on a wild pitch.

“I was going to be a lot more patient than I was in my first at-bat,” Logan said. “I chased a couple of pitches out of the zone, so I was a little bit more patient and selective. I got a hitter’s count, 3-1, and took the pitch you are looking for on 3-1. I was like ‘Alright, get ready. It’s probably coming again.’ Then I just timed it up and was able to put a good swing on it.”

Ryan Olenek answered for Ole Miss with a one-out homer in the top of the ninth. Then Mize (7-2) ended the game on a grounder to the mound and his ninth strikeout.

Mize allowed two runs, one earned, and didn’t issue a walk. He only needed 77 pitches to get through his outing.

“It’s something that I’m not really used to this year, but I did a lot last year,” Mize said of coming out of the bullpen. “I felt a lot better than I have in the past few weeks. I threw a lot of fastballs and splitters. I didn’t throw one slider. I just stuck with that and it seemed to work for me.”

Nick Fortes and Kyle Watson both drove in runs for Ole Miss in the first two innings.

Golsan doubled off the left field wall in the sixth and scored on a throwing error on a sacrifice bunt attempt by Fortes to tie it at 3. Fortes was stranded at second base after getting there with no outs.

Mize retired the next 10 batters until Olenek’s home run with one out in the ninth cut it to 5-4. Mize then got Tim Rowe to ground out and Bryan Seamster to strike out swinging to end the game.

The Rebels have not won their SEC Tournament opener in back-to-back seasons since winning four in a row from 2005-08.

“It’s unfortunate, but we faced two of the better pitchers in our league tonight,” Ole Miss coach Mike Bianco said.

USM trying to bolster its case for a regional

JACKSON — When his team was left out of the NCAA Tournament entirely in 2015, despite an impressive resumé, Southern... read more