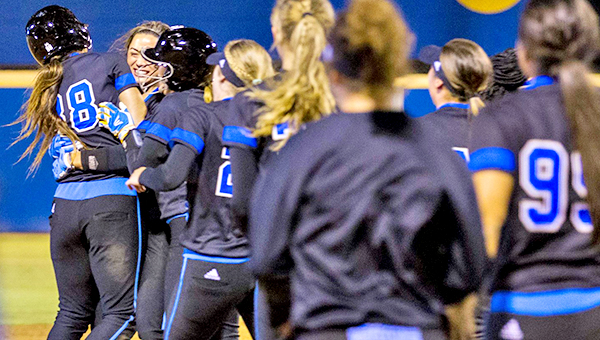 LOS ANGELES — Ole Miss was twice a strike away from victory Thursday night, but wound up a game away from elimination.

Ole Miss overcame a four-run deficit, but lost 8-7 in 11 innings to UCLA in Game 1 of their NCAA softball tournament super regional.

Game 2 of the best-of-three series is Friday at 8 p.m., and will be televised on ESPN.
Madeline Jelenicki’s RBI single in the bottom of the 11th inning finished a game that lasted 4 hours, 5 minutes and featured a hundred twists and turns.

Ole Miss (43-19) scored five runs in the top of the sixth inning to wipe out a 4-0 deficit, but UCLA tied it on a wild pitch with two outs in the bottom of the seventh.

Ole Miss took and lost another lead in the 10th inning, before Jelenicki finally won it with a walk-off RBI single in the 11th.

Gonzalez delivered another two-run single in the 10th inning to put Ole Miss back in front, 7-5. She finished the game 3-for-3 with four RBIs.

Lee, who has thrown every pitch for Ole Miss in the postseason, threw 191 more on Thursday. She finally looked human, however, allowing seven earned runs on 14 hits and three walks.