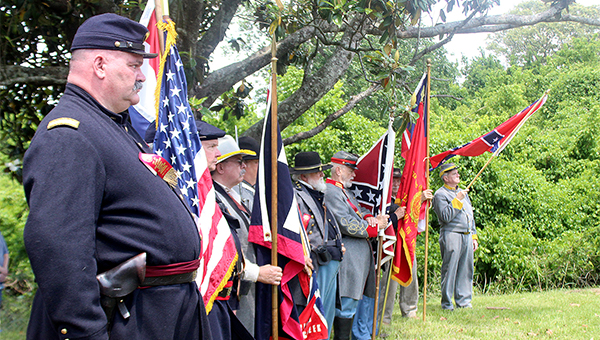 Oct. 17, 1917, 54 years after they fought each other at the site of the Stockade Redan during the Siege of Vicksburg, Union and Confederate soldiers from Missouri gathered at the Vicksburg National Military Park to dedicate a monument to that battle where, literally, brother fought against brother.

Saturday almost 100 years later, on a cloudy, windy day with echoes of thunder sounding like the cannon that once fired on Vicksburg, the relatives of those soldiers came to Vicksburg and the Missouri Monument to rededicate a now refurbished memorial in the Military Park.

VNMP historian Scott Babinowich said the rededication was the result of collaboration between Donald Palmer Jr., post commander in chief for the Sons of Union Veterans of the Civil War, who attended the rededication of the Iowa Monument during the Sesquicentennial of the siege in 2013.

Palmer talked to park Superintendent Bill Justice about restoring the monument and holding a ceremony.

Palmer said Justice told him the monument’s repair was one of the park’s high profile projects and was able to get funding from the National Park Service.

Babinowich said planning for the ceremony began in December.

“We were lucky that there was film footage of the actual dedication in 1917 — a silent film — and were able to acquire it from the National Archives, and we’re trying to mimic this ceremony off that 1917 ceremony as close as we can.”

He said the attack on the redan was the bloodiest part of the siege. A total of 27 union and 15 Confederate regiments from Missouri — 15,000 men were engaged at the Siege of Vicksburg. In all, 150,000 men from Missouri fought in the Civil War on either the Union or the Confederate side.

The monument is one of the few that honors soldiers from the same state who fought on both sides.

“I was here three years ago, and this monument didn’t look like this,” said Darrell Maples, general executive council member of the Sons of Confederate Veterans.

Palmer recalled the original dedication ceremony took place as the United States was preparing to enter World War I.

“Reconciliation was on people’s minds at a time when boys from the north and boys from the south were being mobilized to fight in Europe,” he said, adding the American Flag draped over the monument recalled the reconciliation that came during the original dedication 100 years ago.

Retired Brig. Gen. Parker Hills, who wrote a book on the monuments and memorials in the Military Park described different part of the monument, highlighting the brass relief work and how the depictions on the attacking Union and defending Confederate forces direct the viewer to the center of the monument and the statue of the Roman goddess Nike, who stands on a Viking ship.

“There’s nothing quite, to me, as great an honor to be able to, as an old soldier, honor older soldiers, soldiers who have given so much, then and now,” Hills said. “I have to say, this field of honor has great energy.”

Amid the confusion of people putting on gowns and straightening caps in mirrors in the small dressing room at the... read more