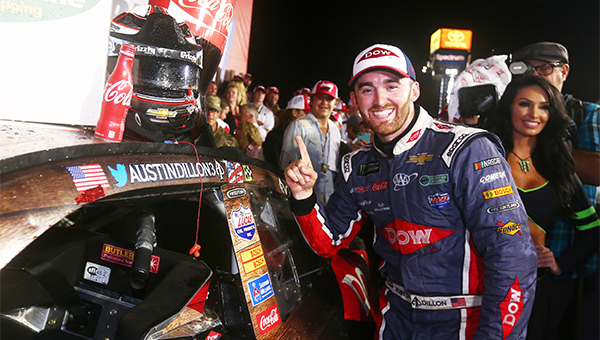 CHARLOTTE, NC - MAY 28: Austin Dillon, driver of the #3 DOW Salutes Veterans Chevrolet, poses for a photo with the winner's decal in Victory Lane during the Monster Energy NASCAR Cup Series Coca-Cola 600 at Charlotte Motor Speedway on May 28, 2017 in Charlotte, North Carolina. (Photo by Sarah Crabill/Getty Images)

CONCORD, N.C. (AP) — The horde of 20-somethings and teenagers like Chase Elliott, Erik Jones and William Byron poised to take over NASCAR seems to grow larger every week. It might be time to add an older name in Austin Dillon to the “Who’s next?” breakout list.

Dillon, a NASCAR veteran at 27, pulled off a stunning upset at Charlotte Motor Speedway on Sunday night, staying out of the pit on the final laps to make up ground and capture the Coca Cola 600 with established winners Kyle Busch and Martin Truex Jr. charging hard. Dillon had enough fuel to last to the checkered flag after sweeping past out-of-gas Jimmie Johnson two laps from the end.

The win gave Dillon his first trophy in the Cup series, brought the iconic No. 3 back to Victory Lane for the first time in 17 years and gave a boost to the team owned by his grandfather, Hall of Famer Richard Childress. Did it also put Dillon front and center among the next wave of racers supplanting retired or departing stars like Jeff Gordon, Tony Stewart, Carl Edwards and, after this season, Dale Earnhardt Jr.?

Dillon is not sure.

“It’s all about performance. Those guys are performing, so they’re going to talk about them,” Dillon said. “I knew we could do it, we’ve just got to do it more consistently. When we do, they’ll talk about us, too.”

Dillon’s performance at Charlotte had lots of people talking.

His new crew chief, Justin Alexander, saw no other strategy for Dillon at the end than to stay out while most other contenders pitted with 35 laps or so left. No one, Alexander reasoned, would outrun Truex’s car with fresh tires and lots of gas, so their best chance was to not give up position.

It was a gutsy move from Alexander, helming his first race with Dillon after being tapped for the job last Monday.

“That was a hell of a call, Justin,” Childress said, smiling.

Childress made some difficult calls to get here, as well. Two of the biggest were backing Austin in the No. 3 car that last took the checkered flag with the late Dale Earnhardt driving at Talladega in 2000. Childress heard critics pick apart his grandson’s skills and demeanor the past four seasons, with some claiming it was an embarrassment to sit him in the same numbered car that Earnhardt led to six of seven championships.

“I want to meet some of them in the parking lot,” said Childress, sounding like a protective granddad.

While there’s a long way for Dillon’s team to go, the win heartened everyone that better, more winning days, could be ahead.

The victory most likely locks Dillon into the 16-team playoff at the end of the season for a second straight year. And it gives the team the rest of the regular season to test setups and packages that might succeed in those final 10 races.

It might also put him near the top of the pack for a younger group of NASCAR fans looking for a charismatic, fast-moving star to latch onto. With so many past champions and celebrated drivers leaving the series, Dillon understands that to rebuild the fan base, spectators must connect with the drivers they follow, so much so that they’ll block off a Saturday night or Sunday to spend at a track.

Dillon knows he took a major step toward that and brought together all fans of Earnhardt’s No. 3 with his win in Charlotte.

“I think it shows he deserved to be in the 3,” Childress said. “He doesn’t show emotion and pressure, but I can tell you away from the track and in talks, he knew how much he wanted to win for all the (No.) 3 fans.”

Dillon does not compare himself to Earnhardt, only to wanting success while driving the number he made famous.

“That was the best of all time,” Dillon said of Earnhardt’s run. “I’m just glad to add to the legacy, and I want to keep adding to it.”

The road to Omaha will, in part, go through Hattiesburg and Baton Rogue as Southern Mississippi and LSU were announced... read more