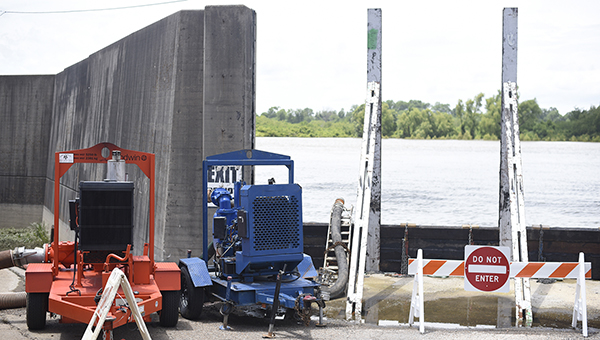 The pumps used control flood waters along the city’s watefront are not being used now as flood waters have begun to recede closer to normal levels. At one point, the river had reached 49 feet, which is six feet above flood stage. (Courtland Wells | The Vicksburg Post)

After hitting a crest of 49 feet in Vicksburg May 26, the Mississippi River is beginning a slow fall and is expected to drop below flood stage by mid-June, officials said.

“We’re still having some problems, but as the river goes down things will get better and we’ll be able to start reopening roads,” Warren County Emergency Management director John Elfer said. “During this whole period, the public has done very well; they’ve been courteous, they’ve obeyed the barricades and the law enforcement officers in the flooded areas.”

He said some people in the Kings community evacuated to other areas, “but that was more of a convenience situation because they couldn’t get to their homes with the streets flooded.”

“It’s something we’ve been hoping for for a long time and finally we got it down in the area,” said Marty Pope, hydrologist with the National Weather Service Office in Jackson, said. “The issue is, right now, how far will it be before it goes down flood stage. That’s our biggest question mark now.”

He said rainfall in the upper Mississippi Basin that occurred over the past weekend could bring a second crest before the river finally begins to drop, but added the forecast for Vicksburg looks good.

Pending any extreme rainfall, he said the river at Vicksburg is expected to fall over the next seven days, going below flood stage about June 14.

The Mississippi began rising the first part of May, with the National Weather Service initially predicting a 46.5-foot crest that was later elevated to 48 feet and then to 49. The high water flooded several roads and streets in the county, most notably closing Mississippi 465, the main road to Eagle Lake.