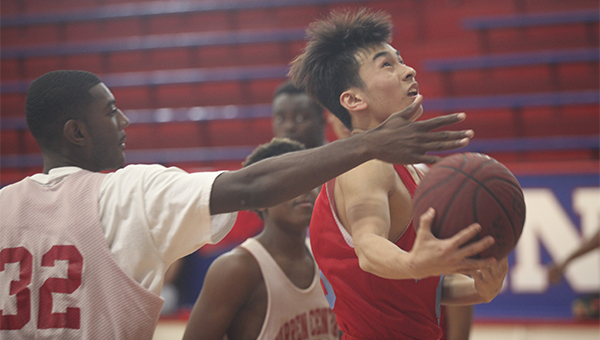 After winning only 11 games last season, the Warren Central boys basketball team has big plans for the 2017-18 season.

The Vikings have an experienced group returning from last year’s team, which advanced to the second round of the state playoffs.

The process of capitalizing on their returning talent starts months before the games start to count, though.

Warren Central head coach Bruce Robinson has put together a grueling summer schedule for his team, which will see them play as many as 30 games in the month of June.

“It helps us be able to determine who’s going to be able to help us in the regular season,” Robinson said. “We share so many athletes so it really helps us get some of the football players acclimated to what we’re doing because after June, July we won’t see them until the season starts.”

A major point of emphasis this summer is developing a consistent presence in the post, something that has been lacking in recent years.

“Our perimeter the last two, three years has been solid, but we kind of struggle in the post,” Robinson said. “That kind of keeps us at a certain level where we aren’t getting to the plateau of wins.”

One of the players hoping to play a role in solidifying the post is senior DeArius Henyard.

He is spending this summer working to take the next step in his development in order to help the Vikings improve upon the 2016-17 season.

“I’m a big man so I’ve been working on my post moves,” Henyard said. “It is really important. We haven’t had a good post game in about three years. I’m trying to come in and be a dominant big man.”

Morning practices and a grueling schedule, including as many as 10 games next week, offer the Vikings a chance to become a cohesive group long before the season even begins.

Robinson is also hoping the month of summer balls helps to separate those that are committed to the team and getting better from those that aren’t.

“We’ve got to determine some of those that really want to be committed to what we’re trying to do,” Robinson said. “I told this team that I’m banking my career on them, because we have experience coming back.

“If we’re going to be good come February and March, and that’s when it really counts, we’ve got to have some commitment now. We are trying to learn how to play with each other because we do have some new faces.”

Part of the summer schedule includes the 6th annual Viking Shootout Friday. Teams from Pisgah, Germantown and Jefferson County will compete along with Warren Central throughout the afternoon with varsity, ninth grade and eighth grade teams each playing games.