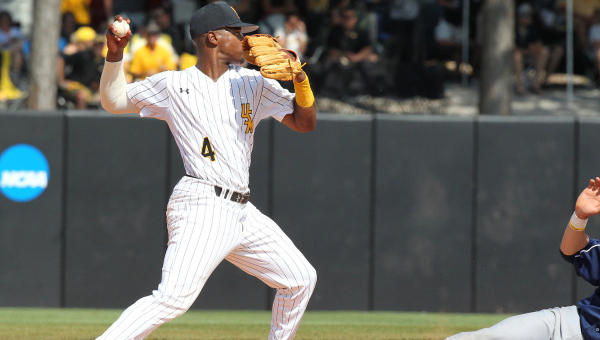 USM comes back from 6-1 deficit to defeat UIC

HATTIESBURG — With one swing of University of Illinois at Chicago catcher Rob Calabrese’s bat in the top of the fifth inning Friday afternoon, Southern Miss found itself staring at a five-run deficit just about halfway through their opening-round game of the Hattiesburg Regional.

As they have so often this baseball season, the Golden Eagles came from behind, rallying for seven runs in the fifth and sixth innings and then holding on for an 8-7 victory before 4,239 at Taylor Park.

Matthew Guidry came off the bench to drive in three runs and top-seeded Southern Miss (49-14) took advantage of three errors by the top fielding team in Division I collegiate baseball to snuff the fourth-seeded Flames (39-16) in the end.

“You certainly take an ugly win over a pretty loss, and that’s what it was (Friday). I’m proud of our guys coming back from being down 6-1. When we went up 8-6 we were able to keep that momentum.”

Nick Sandlin got the last out in the seventh inning, and then finished off the Flames in the final two.

In all three innings, UIC at least had a runner at third base, and in the ninth, Sandlin loaded the bases before getting a force out at second base to end the game and pick up his eighth save of the season.

Hayden Roberts (5-2) came out of the bullpen to replace starter Kirk McCarty and pick up the win with 1 2/3 innings relief.

Charlie Cerny (0-2), the third of four UIC pitchers, took the loss, allowing four runs in 2/3 of an inning, though only one was earned.

Guidry pinch hit in the fifth and greeted right-handed reliever Mitchell Schulewitz with a two-run triple to left-center field, scoring Irby and Braley, and Tracy Hadley followed with a single to cut UIC lead to 6-4 .

In the sixth, Guidry singled to center to score Mason Irby with the go-ahead run and send Matt Wallner to third. Moments later, Wallner made it 8-6 when he scored on a wild pitch.

UIC got one run back in the seventh inning, but couldn’t close the gap.The Flames outhit Southern Miss eight to seven in the loss.

in the lo, with Ota smashing a pair of doubles and a triple, and Thomas two singles.