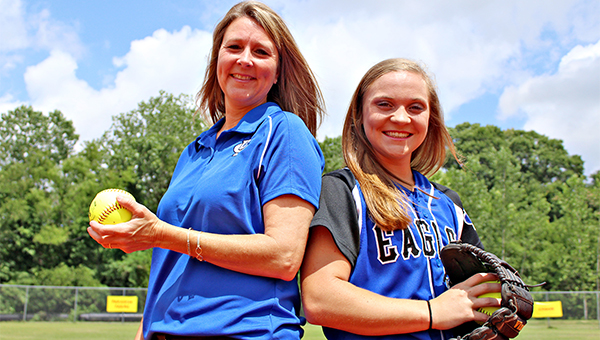 Porters Chapel Academy’s Amanda Yocum, left, and Hannah Embry, right, are the 2017 Vicksburg Post softball Coach and Player of the Year, respectively. The two helped PCA to a 24-13 record and to the MAIS Class AA state tournament this season. (Ernest Bowker/The Vicksburg Post)

When Amanda Yocum took over as Porters Chapel Academy’s softball coach in 2006, the program was coming off a third-place finish at the MAIS Class A tournament and building a strong pedigree.

PCA barely had enough returning and new players to field a team in Yocum’s first season. Understandably, a number of lean years followed as the program went through more of a build than a rebuild.

“I played my first year with nine (players). I actually played a few games with eight,” Yocum said. “We suffered through three or four years where softball just wasn’t strong. We didn’t have a lot of girls who were playing.”