One dead, one jailed in Bovina stabbing

One man is dead and another is being held in the Warren County Jail without bond after a stabbing at a camper trailer park in Bovina.

Warren County Sheriff Martin Pace said James Robert Massey, 38, faces a charge of murder in the death of the 53-year-old victim, who was stabbed multiple times. The assault was believed to have occurred late Saturday. Pace said Massey gave deputies multiple addresses, including addresses in Braxton and the Jackson area.

Pace identified the victim as Tracey Bailey, 52. He was pronounced dead at the scene by Warren County Coroner Doug Huskey, and an autopsy has been ordered. 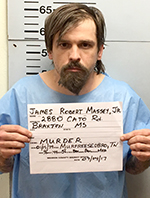 Pace said the man is believed not to be from the Vicksburg area.

He said deputies received a call about 5 a.m. Sunday that someone may have been seriously injured in an assault Bailey’s home, located at 415 Tiffintown Road Lot D-4. Deputy Silento McMorris arrived to find Massey sitting in the car in front of the camper, with blood visible on his car.

When McMorris took Massey into custody, he found he was armed with a knife. After another deputy arrived, he and McMorris entered Bailey’s camper and found him lying on the floor.

According to sheriff’s office reports, there was a gathering of people at the camper, and Massey and the victim got into an argument. At some time during the argument, Bailey was stabbed.