Vicksburg leadership, future of sports complex up for grabs today 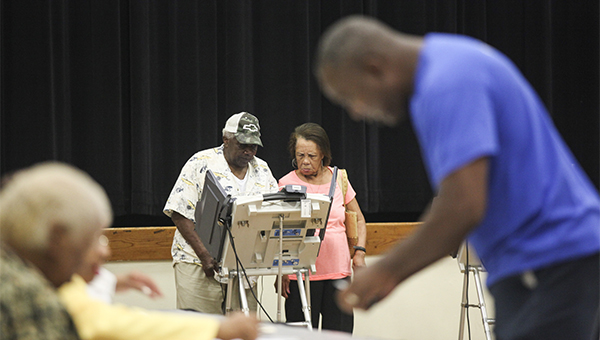 CW and Catherine Tucker vote in the municipal election as Robert Lee signs in at the Vicksburg Auditorium Tuesday. (Courtland Wells/The Vicksburg Post)

Today marks the end of the weeks of campaigning and fundraising. It marks the end of advertising and get out the vote efforts. It ends the canvassing for votes, rallies and searching for the next, perfect street corner for your next campaign sign.

Today, the voters have their say.

Voters began the process of making their decisions in Vicksburg’s municipal general election at 7 a.m. Tuesday, casting votes in the race for Vicksburg’s mayor and the alderman position that represents their area.

They also began deciding on the tax plan that would fund the city’s proposed sports complex.

“We are expecting everything to go smooth, considering the primaries went smooth,” Vicksburg city clerk Walter Osborne said. “Voters need to remember to go to the correct city precinct, and take with them their ID.

“During the primaries, we did have some voters who were confused and went to where they vote during county elections.”

Osborne said the Vicksburg Election Commission did meet with poll managers Monday afternoon to go over final details and hand out supplies.

With weather forecasts improving for voting day, officials are hoping for a stronger voter turnout then what was seen during the primary, when less than 25 percent of registered voters turned out.

“At this point, all we have to show is the number of absentee ballots that have been mailed back,” Osborne said. “And, as of right now, it looks like we have more than what we received for the primary.”

In 2013, during the last municipal general election, 5,185 voters turned out. That accounted for just 31 percent of the registered voters. In that election, though, only the mayoral race and the South Ward race had competition. North Ward Alderman Michael Mayfield Sr. did not have an opponent in his re-election bid.

This time, all three offices have competitive races, which could lead to a higher turnout.

While the races for aldermen included an incumbent and a first-time challenger, the race for mayor is a rematch from the 2013.

Developer Daryl Hollingsworth is making another bid for the city’s top office, taking on George Flaggs, who this time is the incumbent. In the 2013 election, when Flaggs and Hollingsworth were making their first runs for mayor, Flaggs knocked of Hollingsworth, earning 77.58 percent of the vote.

See Wednesday’s edition of The Post for extensive coverage of the election, including interviews with each of the candidates.