Oakes makes an unlikely run to Player of the Year 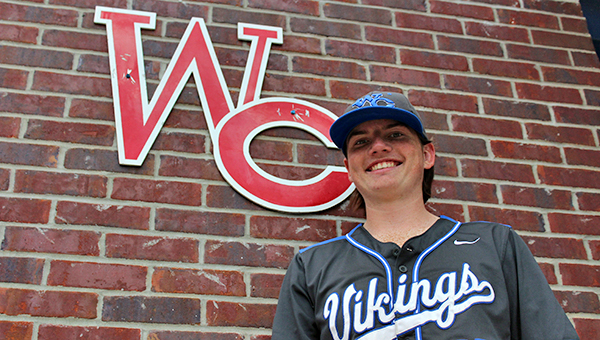 Warren Central pitcher Christian Oakes is the 2017 Vicksburg Post baseball Player of the Year. Oakes had a 0.58 ERA and 36 strikeouts in 37 innings, after starting the season as a relief pitcher. (Ernest Bowker/The Vicksburg Post)

In the 23 years that the Vicksburg Post baseball Player of the Year award has existed, there might not be a more unlikely winner than Christian Oakes.

The Warren Central pitcher had not thrown a varsity inning before this season and admits he would have been happy throwing a few innings of relief here and there. His fastball tops out around 81 mph, which is slow by the standards of Class 6A baseball.

Throughout the season, however, no one could touch him.

Oakes allowed three earned runs in 37 innings — one on a fluky inside-the-park home run, and two others that were charged to him after he left the game. The junior right-hander became the ace of a team that reached the second round of the Class 6A playoffs and solidified a struggling pitching staff.

Oakes was on no one’s radar before the season — not even his own — but emerged by the end as the best high school player in Warren County.

“On a scale of 1 to 10, a 10,” Oakes said in gauging his surprise at his selection. “I came into the year at the jamboree and threw a decent inning. The first few games, I knew I wasn’t going to pitch. (Coach Conner Douglas) finally gave me some innings against Faith, Alabama. It was my first varsity outing, and I guess I did a good enough job that he wanted me to do it again.”

Oakes didn’t become an overnight sensation. He pitched well as a reliever, but it still was only an inning or two at a time. His first six outings covered a total of just nine innings.

In that span, however, he didn’t allow an earned run and only gave up three hits. Four runs scored on him, but came as the result of errors.

“Every time he came in, it was like, ‘Let’s see if he can keep it going,’” Warren Central senior catcher Tyler McRight said. “Then it’s like, ‘Wow, he’s that good.’ He does what we needed him to do — get ground balls and pop flies.”

Oakes got his first start April 4 against Murrah. He had eight strikeouts, only walked one batter, and pitched five scoreless innings as the Vikings won 10-0. That was followed by three effective relief appearances, and then two stellar ones in the playoffs.

In the first round against Callaway, Oakes pitched five scoreless innings in another 10-0 victory in Game 1.

In the second round against Tupelo he got the ball for an elimination game in Game 2 and pitched 6 1/3 scoreless innings before tiring in the seventh. Oakes left with the bases loaded and two of the inherited runners scored. He wound up with a no-decision as the Vikings lost 3-2 in eight innings.

“I think it was the second game against Clinton when he pitched really well, and we saw it,” Douglas said. “When he got the ball (against Tupelo) and did the same thing, we saw he could flat-out pitch. Demeanor means a lot, and he’s got it. Everybody around him plays better. He has that ‘It’ factor.”

“You keep an ERA below one, you’re doing something, especially with the games he pitched,” Douglas said. “You can’t luck your way into 30-something innings and that.”

Oakes readily admits he doesn’t have the best arm on the team. He benefited early in the season from being a change of pace to teammate Aaron Greene, whose fastball touches 90 mph, as well as his defense. In the Tupelo game, left fielder Hank Holdiness threw a runner out at the plate and made a sliding catch to save a run, while infielders Vantrel Reed and Logan Stewart turned a double play to end another threat.

What he lacks in velocity, Oakes made up for with accuracy and an ability to fool batters. That allowed him to emerge as a great pitcher in his own right, whether he was starting or relieving.

“My head has always been filled with the idea that if you throw 90, you’re going to go somewhere. I’m not going to be that guy,” Oakes said. “I proved to everybody that you don’t have to throw 90 mph to get the job done. If you throw three pitches for strikes, you can get the job done.”

Douglas said he can see Oakes getting some college offers if he continues to develop in his senior season. He figures Oakes’ velocity will nudge up into the 82 to 84 mph range, and his control and demeanor will be enough to draw interest from at least the state’s junior colleges.

In the meantime, Douglas said Oakes proved something else besides the concept that velocity isn’t everything. He proved hard work and seizing an opportunity can turn anyone into the best around.

“He always went the extra mile with his conditioning. He hit an extra gear when it mattered,” Douglas said. “It’s always good to see the blue collars and the guys not overly blessed with ability and talent overcome their weaknesses. He wanted to be a dude and he worked hard and became that guy we needed. He’s a guy you wish you had 10 of them.”

Warren Central’s Douglas is Coach of Year for fourth…