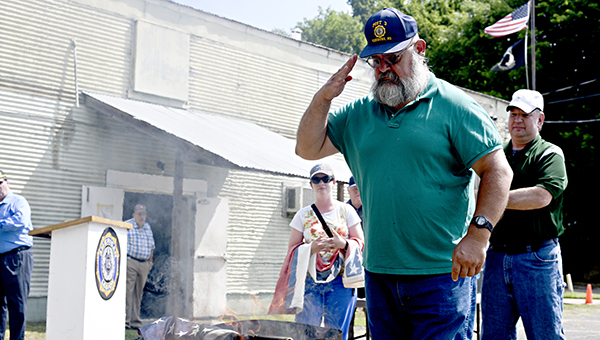 Randy Sharp, Sergeant of Arms, salutes after retiring an American Flag by burning it at the American Legion Post 3 in Vicksburg, Miss. Saturday. Flags are deemed to be retired if they are "tattered, worn out and faded but it varies," said First Vice Commander Shawn Cosgrove. Before being retired flags can be cut and at that point they are no longer a flag but are still to be disposed of in a respectable manner such as burning, one of the ways to retire a flag. (Courtland Wells/The Vicksburg Post)

It is a ceremony grounded in respect and love for country.

The well-worn and tattered flags are draped one by one over the fire. The flames crackle and jump as the fabric melts away and the veterans salute in silence. For them, it is more than just a frayed rectangle of cloth, but a symbol of honor, sacrifice and country.

Saturday morning, members of Vicksburg’s American Legion Post 3 and members of the community gathered to retire more than 25 American Flags by properly burning them.

“We present here these flags of our country, which have been inspected and judged as unserviceable,” American Legion Post 3 vice-chairman Shawn Cosgrove said. “They have reached their present state in proper service and tribute. A flag may be a flimsy bit of gauze or a beautiful banner of the finest silk. Its intrinsic value may be trifling or great, but its real value is beyond price for it is a precious symbol of all we and our comrades have worked for, lived for and died for.”

The flags that were retired flew throughout Vicksburg at the National Military Park, on city buildings and at people’s homes. They are given to the American Legion to be properly retired. The guidelines for the ceremony are outlined in the American Legion handbook, and after each flag was retired, the ashes were gathered and buried out of respect.

“This is a formal way of the proper destruction of an American Flag,” Post 3 commander Carlos Baker said. “Ones we are destroying have shown and flown in honor, or been used in honorable places for veterans or even at your home.”

The ceremony was a family affair for the Bakers, as Carlos’s son Michael brought along his wife and two daughters, who all participated.

“It is respecting your flag and your country. It is where you came from and why we are who we are today, and the ability we have to do what we want to today,” Michael said of why he thought it was important for his daughters to attend. “It takes a lot to teach respect to anybody nowadays. It’s them seeing how to do things properly and understand and be thankful for what we have.”

Air Force veteran Melvin Guice attended the ceremony Saturday to honor the flag that holds a special meaning for him follwing his years of service. He silently stood at attention watching each flag burn away before reverently placing one into the flames himself.

“I’ve never done it before, and I was told it was a dignified way to destroy the flag and I wanted to come out today and be a part of it,” Guice said. “The flag means a lot to me. Once you serve, the flag is different and a lot of people aren’t honoring the flag like they should, and this is one way we can honor our flag so I wanted to be a part of it.”

American Legion Post 213 on Main Street will also host a flag retirement ceremony Wednesday. Flags can be donated to American Legion at any time and they will properly retire them.

Whispering Woods apparently on the market while authorities investigate…