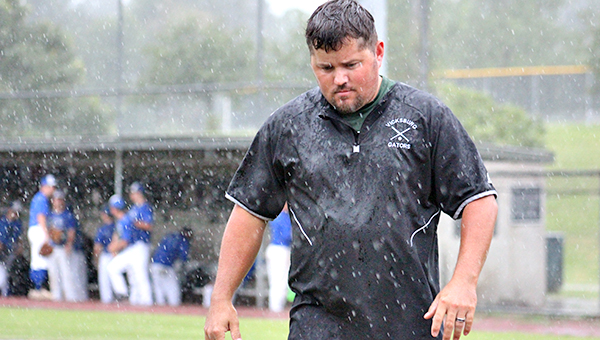 A drenched Vicksburg High coach Derrick DeWald walks back to his team’s dugout at Bazinsky Field after Monday’s doubleheader against Porters Chapel Academy was rained out. It was the third rainout for each team in the past week. (Ernest Bowker/The Vicksburg Post)

Porters Chapel Academy’s and Vicksburg High’s baseball teams gathered at Bazinsky Field on Tuesday afternoon for the doubleheader that would finally kick their summer programs into high gear.

The only throwing that was done, however, was a few warm-up tosses. The only hitting, when both teams hit the bricks to dash back to their cars through heavy rain and lightning.

It’s been a familiar — and frustrating — routine for both teams this month. It was the third summer doubleheader PCA has had rained out in the past week. The Eagles have yet to play any of the 14 games on their schedule that runs through June 27.

Vicksburg is 1-for-8, with three doubleheaders rained out and another at Greenville last week cut down to a single game. They’ll try again Tuesday at Terry, although more thunderstorms are in the forecast.

“It’s frustrating, but it’s baseball. It’s part of it. You want to get your innings in and get to play. But it’s the weather in Mississippi. You can’t help it at this time of year,” said VHS assistant coach Derek Sims, who handles the team’s summer program.

Although they haven’t been able to actually play games, both the Eagles and Gators have done their best to put in whatever work they can. They’ve each gotten a number of practices under their belt since the summer workout period began two weeks ago, as well as some weightlifting and conditioning sessions.

The latter is a cornerstone of Vicksburg’s plan to continue its forward momentum.

The Gators improved from three wins in 2016 to seven in 2017 and are only losing three seniors to graduation. The bulk of the team is underclassmen who need to get bigger, faster and stronger to compete on a high level at Class 5A. The offseason regimen is designed to do that as much as improve their on-field skills.

“Bigger, faster, stronger is definitely a plus. We have the time, so why would you not work on it to try and match the programs that we’re playing against? It’s not all on the field. It’s a lot of that stuff. And if you aren’t doing it, you’re falling behind in the race, so we definitely have to put an emphasis on weightlifting,” Sims said. “We have most everybody there and they’re working hard and trying to get better. On that end, I think we’re definitely making progress.”

Like the Gators, Porters Chapel has been trying to work around the rain and make the most of its off-the-field opportunities. PCA assistant Larry Allen — who, like Sims, coaches the summer program — said the weather has oddly cooperated every day except game days.

“The days that we’ve gotten our practices in, we’ve had pretty long practices so we’ve got a lot of stuff covered. It hasn’t hurt us as much as some people might think,” Allen said.

PCA finished 13-14 and failed to make the MAIS Class AA playoffs this season. Also like their counterparts in the other dugout Monday, they’re returning a number of players for 2018.

This June is both a continuation of the 2017 season and the start of the 2018 campaign, and Allen is hoping there’s enough carry over to drive everything forward.

“The thing that carried over from the season is the fact that we had a bad taste in our mouth about the playoffs and all of that,” Allen said. “Hopefully all of that carried over to the summer, because we’re starting to work now toward next year. Whatever final goal we want to get to next year is going to start over the summer.”

Now they just have to get on the field.

On Monday, the rain held off until about an hour before the first pitch and both coaches had hoped to get at least one game in, if not both.

Then, just after 4 p.m., a passing downpour turned into a steadier rain. Each team waited in their dugout for about an hour as the field became more and more flooded — at one point they even started stretching and throwing as the rain slackened for a few moments — but it never let up completely.

Both dugouts flooded, as did the infield dirt and grass. Eventually, small ponds of water stood everywhere and several hours of field preparation earlier in the day went to waste. They called it just a few minutes before the scheduled first pitch at 5 p.m.

The Eagles will try it again Thursday at home against Tri-County at 4 p.m.

“It is what it is,” Allen said philosophically. “It’s kind of like the regular season, too. We just have to schedule some baseball games and some rain will come.”