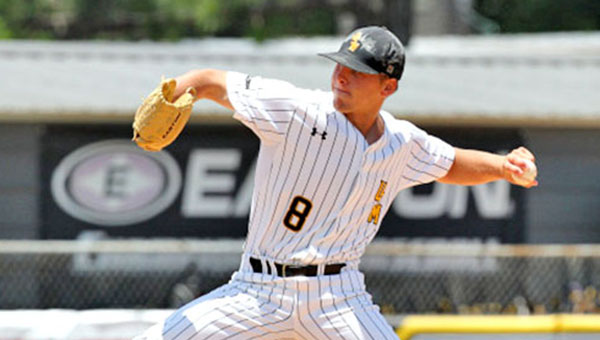 Southern Miss pitcher Kirk McCarty was selected by the Cleveland Indians in the sixth round of the Major League Baseball draft on Tuesday. (Joe Harper/Southern Miss Athletics)

HATTIESBURG — A day after Mississippi State had a player taken in the first round of the Major League Baseball draft, Southern Miss moved into the spotlight.

Two USM players — pitcher-infielder Taylor Braley and pitcher Kirk McCarty — were selected on day two of the draft by the Miami Marlins and Cleveland Indians, respectively.

Braley was picked in the sixth round, 179th overall. McCarty went in the seventh, at No. 222.

Both Southern Miss players are juniors and could return for their senior seasons. If Braley signs, he would receive a $253,800 signing bonus based on his draft position. McCarty would receive a $179,500 bonus.

“I haven’t decided anything yet because I haven’t really talked to the Marlins about the money yet,” Braley told The Hattiesburg American. “(The money’s) got to be on up there, but I really haven’t had time to talk to them about. So I don’t know much yet.”

Braley was named a second-team All-American by Baseball America last week after finishing 2017 with a 7-2 record on the mound with a 3.40 ERA. He struck out 78 over 82 innings.

Braley also hit .313 with 17 home runs as the Golden Eagles’ primary third baseman.
McCarty is a two-time first-team All-Conference USA selection. He went 10-2 with a 3.52 ERA in 17 starts this season.

It’s the first time since Jarrett Hoffpauir and Matt Shepherd were both chosen by the St. Louis Cardinals in 2004 that Southern Miss has had two players picked in the first 10 rounds of the draft.

Two other Mississippians were picked on day two of the 2017 draft, which covered rounds 3-10.
Itawamba Community College first baseman Tyreque Reed was selected by the Texas Rangers in the eighth round.

South Alabama pitcher Randy Bell, meanwhile, went to the Seattle Mariners in the 10th round. Bell is a Woodville native who was a two-time All-MACJC selection at Hinds Community College in 2014 and 2015.
LSU had three players — shortstop Kramer Robertson, second baseman Cole Freeman, and pitcher Jared Poche’ — picked.

Robertson and Freeman were both picked in the fourth round, by the Cardinals and Washington Nationals, respectively. Poche’ went to Oakland in the ninth round.

The final day of the draft takes place Wednesday with rounds 11-40 and starts at 11 a.m. The draft can be followed at MLB.com.