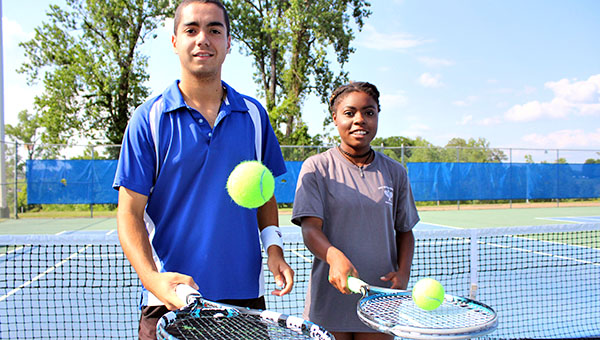 When the rosters for the Mississippi Association of Coaches Tennis All-Star Tournament were released, they included state champions, players who have regularly competed for state titles, and Alex Velazquez.

Velazquez, a Warren Central senior, had never been past the first round of the Class 6A individual tournament before reaching the mixed doubles semifinals this year. He’s a capable player, but admitted even he was stunned to be included in the tournament featuring the best of the best from around Mississippi.

“That’s a big honor. I know people that are on it, and they’re some pretty big name players. There’s a kid from Madison-St. Joe that’s only lost once. Ever,” Velazquez said. “To be on that team is a good honor. Let’s just hope the kid from Pontotoc is worse than me.”

Velazquez and his Warren Central teammate Olivia White will compete in the tournament Thursday at 1 p.m. at Parham Bridges Park in Jackson.

The tournament follows the college format, where six players on each team — in this case, North and South — each play a singles match and a doubles match. Each match is worth one point, and the team with the most points wins.

“They pay attention to players over the years. They’ve known Alex since his freshman year, and Olivia grabbed a lot of people’s attention this year,” Pilgrim said.

Velazquez has been a regular both on the high school level and Mississippi’s junior tennis circuit for several years. He’s won a number of tournaments and matches, but not at the MHSAA state tournament.

White got to the second round of the Class 6A girls’ singles tournament in 2016, and didn’t lose a match in 2017 until late in the season.

Instead of going it alone, however, the two players teamed up to play mixed doubles in this year’s state tournament. It turns out they were better together than apart. They won their first two matches, including an upset of No. 3 seed Elizabeth Switzer and Gordie Verrett of Gulfport, to reach the semifinals of the 16-team draw. Velazquez and White ran out of gas there — they lost in three sets to No. 2 seed Anna Hudson and Cole Wagoner of Ocean Springs — but their run provided one last, great memory in two solid high school careers.

Amazingly, the state tournament was only the second time Velazquez and White had ever played together in a mixed doubles match. The first was at the Division 4-6A tournament, which they had to play to qualify for state.

“It would have been bad during the season to put the two best players together, because it was a waste,” Velazquez said. “The first time we played was the district tournament. We never even played together in practice.”

And now, as soon as they came together, they’re drifting back apart. White will play next season at Hinds Community College, but for Velazquez the all-star tournament will be his last match as a regular competitor.

As they transition away from high school, both WC players said they’ll probably treat the all-star tournament as a friendly — if competitive — exhibition rather than a normal match.

“I’d like to play for fun because it’s going to be my last high school tennis match, but it’ll be different,” White said.

Velazquez said his plan for the tournament varies when he thinks about it.

“My opinion changes sometimes. Sometimes I want to win, and sometimes I just want to play,” he said, adding with a laugh, “Most of the kids I’m playing are playing in college, but who cares?”

HATTIESBURG — A day after Mississippi State had a player taken in the first round of the Major League Baseball... read more