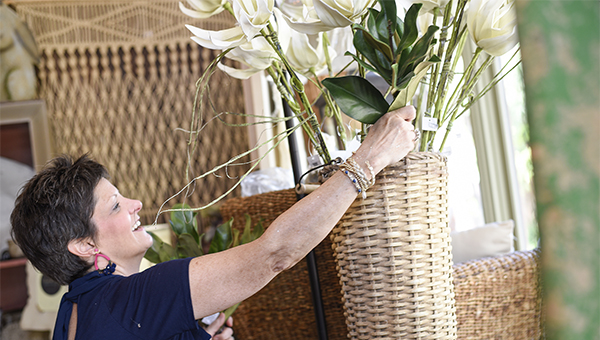 Nan Green arranges window decorations at the Cinnamon Tree Wednesday. With the upcoming Miss Mississippi Pageant businesses in downtown Vicksburg are expecting to see an increase in visitors throughout the week.(Courtland Wells/The Vicksburg Post)

Crowns are painted in the intersections, banners will soon be hung along Washington Street and the merchants are ready for increased crowds as downtown Vicksburg prepares for the 2017 Miss Mississippi pageant which is only days away.

“It is usually a really busy week for everybody,” Bobbie Marascalco, who owns Peterson’s downtown, said. “A lot more traffic. While the girls are busy practicing and doing things, the mothers and aunts and cousins and all the other people that are in town are out shopping and walking around. It is a lot more people on the street than normal.”

Storeowners and restaurants throughout downtown Vicksburg are planning for one of the busiest weeks of the year as hundreds of people descend on the city. Wynette Burton, the Lead Server and Assistant Manager at Rusty’s Riverfront Grill, said they see an increase of “at least 30 percent” over a normal week.

“It is very busy for us,” Burton said. “We are hit all week long from the time the pageant starts until the end. We are busy from 11, when we open, until 10. Sometimes, on pageant night, they will come hit us late and we will be open until 11 o’clock or so.”

The staff at Rusty’s are experts in the pageant rush at this point though, and they are prepared for the crowds.

“We have the same staff,” Burton said. “We’re used to it. They’ve been coming down here giving us their patronage for years, ever since Rusty has been in this spot. We know how to handle them.

“It is nice. We are glad they come to us. There are other businesses they could go to, but they always seem to come down here and see us and we appreciate it.”

Karen Ruggles has prepared her shop, The Cinnamon Tree, for the week with crowns and pictures of former Miss Mississippis in the window and special crown adorned merchandise.

“You can definitely tell they’re here, we get a lot of good shoppers,” Ruggles said.

Shannon Shealy, who owns The Dragonfly, said they are “noticeably busier” during pageant week and are stocking up on crown merchandise and popular products such as jewelry and bath and body products.

The fanfare isn’t limited to gift shops and restaurants either. With all the little princesses in town for the pageant, Lorelei Books is planning a princess themed story time with crown arts and crafts for Saturday June 24 at 10:30 a.m. at the bookstore on Washington Street.

“It is great.” Burton said of pageant week. “It is a big burst for everybody downtown. They do a lot of shopping.”