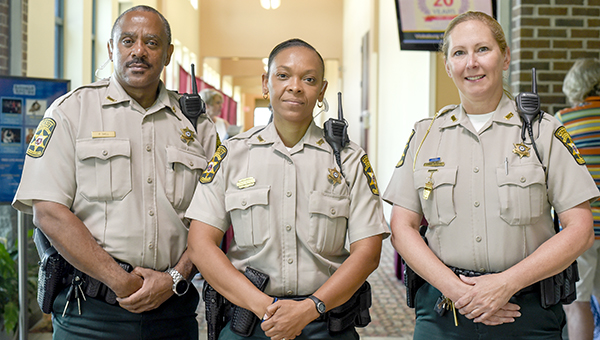 While the organizers, staff, and contestants and their families and friends go through the experience that is the Miss Mississippi Pageant, a team of individuals — some in uniform — are making sure that experience is a good, safe one.

Since the pageant came to Vicksburg in 1958, Vicksburg’s and Warren County’s law enforcement officers have played some part in providing security for the annual event.

“The Warren County Sheriff’s Office played a small part in the pageant when it was at the Vicksburg Auditorium,” Sheriff Martin Pace said. “When it moved the larger venue of the (Vicksburg) Convention Center, that role became larger.”

It’s a job that begins as soon as the contestants arrive in town to register.

“Generally until the pageant begins on Wednesday night with the prelims, there’s generally three of us deputies who do the security basically at the convention center and wherever else the girls are going to be at,” said sheriff’s deputy Connie Ricketts, who heads the sheriff’s office’s security team for the pageant.

“We pretty much assist the Miss Mississippi staff throughout the pageant week to ensure a safe environment for the contestants, the patrons and the staff that’s working it. The young ladies arrive in Vicksburg. They’re pretty much goodwill ambassadors from across the state and one’s going to go on an represent the state of Mississippi for a year.”

When the annual parade down Washington Street Monday kicks off pageant week, Ricketts said there will be extra deputies working with Vicksburg police officers to provide security.

Generally, she said, when rehearsals are held during the day, three deputies will be at the convention center, her, a female deputy assigned to stand outside the dressing room, and another deputy to watch the doors on the center’s top floor.

The Vicksburg police department during the week will man the loading dock door so the equipment used for the pageant is secure.

“No one can enter in any door in the downstairs production area where the production and staff and contestants unless they have a badge to enter,” Ricketts said.

When the preliminaries and the finals begin, however, the security detail is at full strength and working with police and the fire department.

The majority of the deputies working security for the pageant will come from the sheriff’s court security division, and will be split with some helping with parking and others securing the interior and exterior of the building.

During the preliminaries and the Saturday night final, there will be 10 deputies along with the sheriff.

“Generally, the production staff will have people on the inside of the doors checking badges to make sure they have a badge to enter the contestants’ side,” Ricketts said.

She said preparation for pageant security is discussed during meetings held throughout the year.

“I’ve been to three meetings this year, and the meetings for security next year and the preparations will begin immediately after this pageant is over.”

Ricketts said providing security for the pageant is an interesting assignment.

“I get to meet a lot of people from around the state. These girls are fantastic; they’re chipper and laughing and having a great time. It’s an awesome experience. I think this is my fifth year. Before I came to the sheriff’s office, I was with the police department.

During the pageant, she said, the city of Vicksburg and the Vicksburg Police Department block off some of the streets around the convention center to provide additional parking for the pageant, “So it’s best to avoid this area, which includes Mulberry (street), will be completely blocked off, so we can provide a safer atmosphere for people crossing the street and parking.

“We appreciate the public’s patience on those event nights, because there’s always a large crowd with limited parking. We encourage people to show up early, because if you get there right at 7:45, chances are you’re not going to get in the door quick enough to watch the preshow, which is awesome.”

During pageant week, Ricketts said, the deputies work fro, 6:30 a.m. to 10 or 11 p.m.; during the preliminaries and the final — Wednesday through Saturday — the detail will run until about 2 a.m.

Her day begins as 6:30 a.m., when she meets the contestants at the La Quinta Inn to help them and their hostesses get to where they need to go and to serve as the group’s escort to their destinations during the day.

“It’s a stressful week, as far as not getting enough rest, but we manage. It’s an awesome experience, but it can be stressful. A lot of what we do is a lot on the public relations line; talk to the patrons, talk to the parents.

I miss my regular job while I’m doing that, but it’s a little break.”

When pageant weekends, Ricketts will go back to her regular duties with the traffic division, but not before she gets a little time off.

“I have two days off right after the pageant ends before I go back on duty,” she said. “I’m going to catch up on my sleep.”

132 princesses and 3 princes honored at onset of…