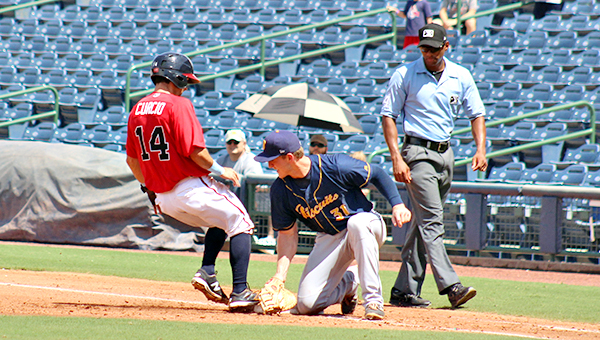 The Mississippi Braves’ Keith Curcio gets back to first base as Montgomery’s Joe McCarthy catches a pickoff throw during Sunday’s game at Trustmark Park. (Ernest Bowker/The Vicksburg Post)

PEARL — Wins and losses aren’t everything in minor league baseball, where development and getting players to the major leagues are the bigger goals.

Even so, the Southern League all-star break will provide a welcome respite for the Mississippi Braves from a 10-day slump.

Luiz Gohara had eight strikeouts in five innings on the mound, and Joey Meneses went 2-for-3 with a double, two RBIs and two runs scored as the M-Braves beat Montgomery 6-3 Sunday in their final game of the first half of the season.

The Southern League All-Star Game is Tuesday night in Pensacola, Florida, and the standings will reset when the season resumes on Thursday. It’s a chance for the M-Braves to wipe the slate clean and start fresh after they lost seven of their last 10 games heading into the break.

In their last six losses, the M-Braves have been shut out three times and scored one run in the other three games. The two runs they scored in the second inning Sunday broke a string of 19 scoreless innings and helped second them into the second half with some positive vibes.

Meneses’ two-run double in the bottom of the third inning put the M-Braves ahead for good, 4-2. Former LSU star Kade Scivicque added an RBI single in the fourth inning, and Luis Valenzuela hit a sacrifice fly in the sixth to make it 6-3.

Gohara, a hard-throwing Brazilian left-hander, won for the first time since being called up to Double-A in mid-May. He allowed six hits and two runs, and struck out eight in his five-inning stint.

Wes Parsons allowed one run in three innings of relief, and Phillip Pfeifer pitched a scoreless ninth for his first save of the season.

The M-Braves will begin the second half of the Southern League season Thursday at Biloxi, with the opener of a five-game series. They’ll return home June 28 to host Chattanooga.