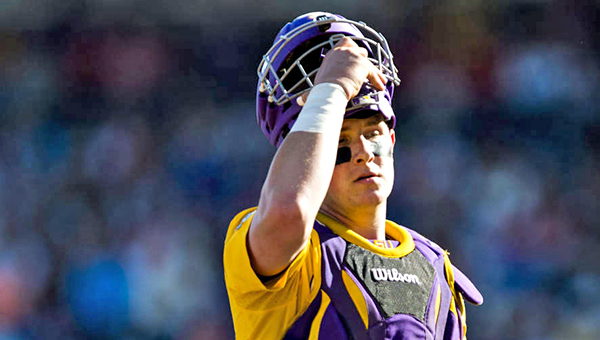 LSU catcher Michael Papierski looks toward the dugout during Monday’s game against Oregon State. The Tigers lost, 13-1, for their worst defeat in the College World Series since 1994. (Chris Parent/LSU Athletics)

The Beavers (56-4), who matched the school-record win streak they set earlier this season, took control of Bracket 1. They don’t play again until Friday, and need one more win to advance to next week’s best-of-three finals.

“We just talked before the game about this is our time, this is our opportunity,” Oregon State coach Pat Casey said. “This is what we came here for. Let’s not miss that moment. So the guys played great.”

The matchup between the teams with the two longest active win streaks in the country was one of the most anticipated at the CWS in years. It turned out to be a dud. The 12-run margin tied the largest in a CWS game in the seven years it’s been played at TD Ameritrade.

“It wasn’t what we expected or hoped for, obviously,” Tigers coach Paul Mainieri said. “Heck of a way for a 17-game winning streak to end. Right from the start things didn’t go well for us.”

Starter Eric Walker (8-2) left the game after throwing four pitches in the third inning because of forearm tightness. Caleb Gilbert held the Beavers for a couple of innings, but they capitalized on a couple of LSU misplays to go up 3-0 in the fifth.

“They’re definitely a scrappy offense,” Gilbert said. “I thought I was making some good pitches. They would just foul it off, and I’d have to go right back at it, do it again. Just couldn’t get that put-away when it was crunch time.”

Oregon State broke the game open in the sixth.

Harrison hammered Hunter Newman’s first pitch to him over the left-center fence for the first CWS grand slam since 2010, the last year the event was played at Rosenblatt Stadium. There had been 196 at-bats with the bases loaded in the CWS since then. It also was just the sixth grand slam in 313 total games in TD Ameritrade Park since 2011, and the second home run Newman has allowed in 100 total innings since 2015.

Harrison broke into a wide smile as he watched the ball fly out, his trot turned into a run and he whooped and pounded his chest as he approached teammates waiting at home plate. Harrison has four home runs and 14 RBIs in seven NCAA Tournament games.

“That’s the stuff you dream of doing,” Harrison said, “and for it to come true on such a big stage is an amazing feeling.”

Fehmel (6-2), who pitched a complete game in the Beavers’ super regional-clinching win over Vanderbilt on June 10, made his second postseason start since the rotation was adjusted to account for the loss of Luke Heimlich.

Heimlich, the Pac-12 pitcher of the year, has been out since it was revealed June 8 that when he was a teenager he pleaded guilty to molesting a 6-year-old girl.

Fehmel wiggled out of a mini jam in the fifth before Zach Watson’s homer in the seventh allowed LSU to avoid getting shut out for the first time in its 62 CWS games.

“I guess the main thing was to keep them off-balance as best I could,” Fehmel said. “I mixed all three pitches for strikes, and I did that for eight innings to the best of my ability, and it worked out.”

Walker’s early injury forced Mainieri to use eight pitchers, which tied the CWS record for most in a game. Walker and Gilbert were the only ones to work at least two innings. Those eight pitchers combined for 12 walks, the most in Mainieri’s 11 years at LSU.

“When all of a sudden you have to take one of your starting pitchers out after two innings, obviously it’s going to tax your staff,” Mainieri said. “And Gilbert I thought was really good. But like you said, they ran his pitch count up, fought off an awful lot of pitches, which is what good hitters and teams do. They were very pesky. And I just thought it was time to get Caleb out of there, and we gave some other guys an opportunity, and most of them had a difficult time throwing strikes.”

The pitching staff’s struggles might have put LSU in a bind for as long as it can last in the tournament. They’ll turn to Jared Poche’, who worked in relief in the CWS opener against Florida State, to tame the Seminoles again on Wednesday.

They’ll still need to win that one and then two more against Oregon State, however, to reach the best-of-three championship series that begins next Monday. Mainieri was hopeful Walker could get another start if the Tigers can last that long, and optimistic about their chances of bouncing back from a one-sided beatdown at the hands of the NCAA Tournament’s No. 1 overall seed.

“So it was a difficult night for the Tigers, but we still have breath and we’ll bounce back on Wednesday, one game at a time from this point on. Didn’t Coastal (Carolina) lose a game early last year and came back? So it’s been done before,” Mainieri said. “It’s not the easiest route. But fortunately there’s some days off that allow your pitching staff to recover a little bit.”

Vicksburg plays host to a number of groups, including…