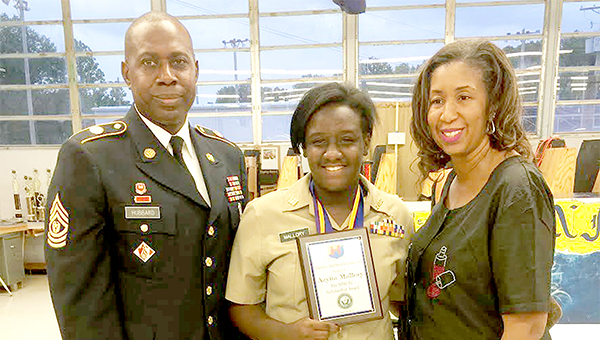 Warren Central graduate Azylia Mallory was the 2017 recipient of the NJROTC Award presented by the David L. Hubbard Foundation.

Each student received a $500 scholarship.

The David L Hubbard Foundation was started by Hubbard’s daughter Shonna Hubbard-Morton in memory of her father who died in 2007. Hubbard served in the U.S. Army for 32 years and worked in security for the U.S. Army Corps of Engineers in Vicksburg after his retirement.

“David L Hubbard was born and raised right here in Vicksburg, Mississippi,” Morton said. “After doing his time in the US Army, he retired in 1988 and made Vicksburg his home. He passed away on Aug. 3, 2007, a day I will never forget. It’s coming on his 10 year anniversary and I’m proud and happy to keep his name alive. I plan to continue the scholarship for years to come.”

To be eligible for the scholarship, the students had to have participated in JROTC for at least two of their four years in high school an write and essay about why they felt they deserved the scholarship. “Those two individuals met all the requirements and their essays were wonderful,” Morton said.

Morton holds multiple fundraisers throughout the year for the foundation including fish fries.

The main fundraiser is an annual masquerade ball on New Years Eve at the Vicksburg Auditorium. The first ball was held in 2016.

She gave out a total of $1,000 in scholarships this year, but said her goal is to provide scholarships to at least five cadets at the conclusion of the 2017-18 school year.

“I did some research and I found out that the JROTC here in Vicksburg, the one at Vicksburg High and the one at Warren Central, had never had anyone to cater to just the cadets,” Morton said. “I thought of a way of being able to give back to the community on his behalf, every year I’m going to give out a scholarship to hopefully several JROTC cadets at Vicksburg and Warren Central High Schools.”

Shaifer plans to attend Alcorn State in the fall and Mallory will be attending the University of Southern Mississippi.

Contestants ready for start of preliminaries on Wednesday