VHS using summer to adjust to changes in basketball program 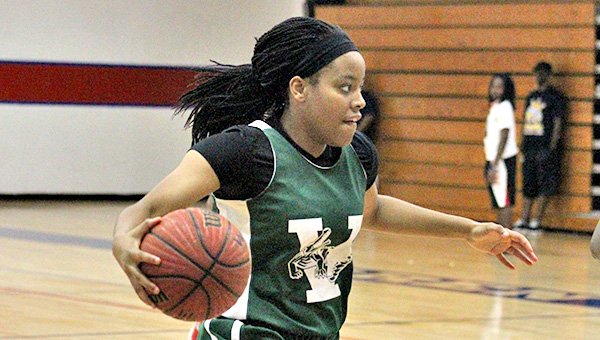 The primary goal this summer for the Vicksburg High girls’ basketball team isn’t winning or losing, or even showing drastic improvement.

It’s all about getting acquainted.

With a new coach and a number of new players on the roster, learning each other’s tendencies and who can fill what roles are the main objectives. Despite losing two games, to Raymond and Warren Central, they took steps toward those on Wednesday as they put some more experience under their belt.

“Right now, they’re learning me and I’m learning them. It’s a different system. We’re learning each other. It’s going to be a learning process. It’s going to be a stepping stone,” new coach Troy Stewart said. “Right now, all we’re working on is defense, defense, defense. And while they’re fresh, the defense looks good. As their legs wear out it slows down. Warren Central is a good team, so I’d expect that.”

Stewart is taking over for Barbara Hartzog, who led the Missy Gators for 11 seasons before retiring this spring. Stewart is inheriting a program that hasn’t had a winning season since 2009-10, but it’s also one he’s very familiar with.

Before leaving to become the boys’ head coach at McLaurin High School for two seasons — and the girls’ head coach for one — he spent 11 years as an assistant with Vicksburg’s boys’ team.

“I only left with the intention of coming back,” Stewart said. “I left to go get some head coaching experience so that when I got my resume out there and started talking to people about coming back home, I’d have a legitimate shot. It worked.”

So far under Stewart, the Missy Gators have had mixed results. They won four out of five games at Delta State’s camp, are 2-4 in the Jackson Public Schools summer league, and lost both games of Wednesday’s doubleheader.

Vicksburg got off to a good start in the second game against a talented Warren Central team. It led 13-7 late in the first quarter, but Warren Central went on a 13-2 run to seize control and led by 12 points at halftime. The game used a 10-minute running clock for four quarters.

Warren Central wound up riding its second-quarter surge to a 62-38 victory. Its lead never dipped below 10 points in the second half.

Stewart attributed the loss to several factors. Warren Central made its run with several starters on the floor against a VHS lineup that had backups in for most of the second quarter. Conditioning and experimenting with different tactics also played a part, he said.

All are things the team is working on through the June practice period that ends next week.

“It’s extremely important for me, simply because I came in and watched them play and saw things I would like to try to do, and I’m going to attempt to put them in,” Stewart said of June’s schedule. “So for us, it’s more or less changing their mindset from playing a zone all the time. I want to press. I want to be up tempo. I want to go, go, go, go, go. Their bodies aren’t used to it yet, so this month is extremely important trying to get them conditioned to what I want to do.”

Stewart added that he’s pleased with what he’s seen so far. The Missy Gators were a dismal 4-21 last season, but he said spirits have been high and the team’s talent is on the rise. Nineteen players are also on the roster, which should give him some options to sort through when the run-up to the regular season begins in August.

After the summer period ends, the Missy Gators will have a month off until school starts and they’re allowed to work out during the activity period at the end of each day.

“The girls I’m dealing with, I think they have the opportunity to come out of district and go a little bit further. I think once we get our sets together, we’re going to be fine,” Stewart said. “We’ve got talent, so I’m going to use that to my advantage. The morale is real high right now because everything is changing. They’re happy and they’re ready. We have practice every Monday, Wednesday and Friday and I haven’t had one girl miss. They want to work. It’s a situation where everyone wants to get better. To be the team we want to be, we have to take some of these lumps. I’m extremely happy.”

Summer rain will affect teams down the road