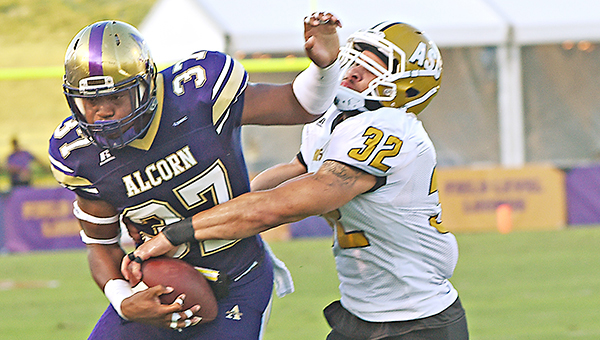 Alcorn State’s Terry Whittington (37) attempts to break free from Alabama State defender Kourtney Berry (32) last season. This year’s game between the Braves and Hornets has been moved to a Thursday night and will be televised on ESPNU. (Nicole Hester/The Natchez Democrat)

Alcorn State’s football team will once again get the primetime treatment this season.

Alcorn announced Friday that its game at Alabama State has been moved to a Thursday night, Oct. 5, and will be televised live on ESPNU as part of the network’s Southwestern Athletic Conference package. Kickoff is scheduled for 6:30 p.m.

The game was originally scheduled for Saturday, Oct. 7, and was not on the national TV schedule.
It’s the second year in a row that the Braves and Hornets will play a game televised on an ESPN Network.

“Anytime you get a chance to play a nationally televised game it is great, not only the football program, but also for publicity of Alcorn State University. It’s great exposure for both schools and the conference,” Alcorn head coach Fred McNair said in a school release.

Alcorn has beaten Alabama State three years in a row after losing 10 of the previous 11 games in the series. Alcorn has not won four in a row against the Hornets since the 1999-2002 seasons. One of those wins was a forfeit that Alabama State won on the field.

A road game at Florida International follows before the Braves return home to host McNeese State and Southern University. The Alabama State game is the second half of a two-game road swing that also includes a trip to Houston to face Texas Southern on Friday, Sept. 29.

The Texas Southern game is not scheduled to be televised.