For the second time in her high school career, Clinton High School sprinter Demi Washington has won the Gatorade Mississippi Girls Track and Field Athlete of the Year Award.

With Washington leading the way, the Lady Arrows totaled 123 points and won the Class 6A team championship. 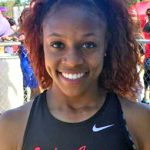 “Demi’s drive for excellence is immeasurable,” Clinton coach Johnathan Perkins said in a release. “One look at her high school career confirms that. She’s a seven-time state champion.”

Washington’s teammate Monica Mosley won the Gatorade award in 2015 and 2016.

The Gatorade Athlete of the Year Award has been handed out each year since 1985 and recognizes the top athlete in each state in track and field, cross country, basketball, soccer and baseball. It is generally viewed as the state’s player of the year award.