LSU gets rematch with Oregon State 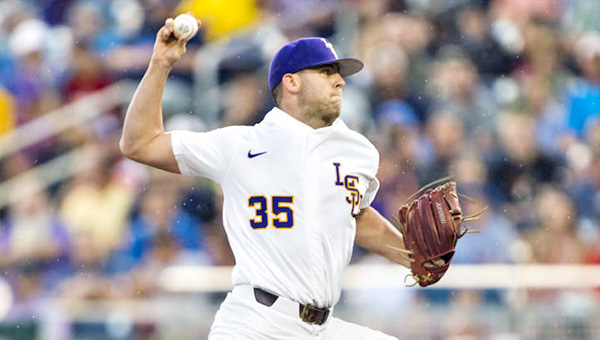 If there was one silver lining for LSU in the wake of its first encounter with Oregon State, it was that things couldn’t possibly go any worse.

It was also that they could earn another shot at the Beavers, which they did and now have in front of them.
LSU (50-18) will try to keep its season alive Friday afternoon when it takes on Oregon State (58-4) at the College World Series. LSU needs to beat the Beavers twice — today, and then again on Saturday — to advance to the best-of-three championship series against either Florida, TCU or Louisville.

Oregon State beat LSU 13-1 in their first meeting on Monday.

“Oregon State is a very formidable opponent,” LSU coach Paul Mainieri at a press conference Thursday. “Obviously, things didn’t go very well for us the other night, but I don’t think they’re 12 runs better than us. I think things just got out of hand. We’re glad to have another chance. We’re among the last four teams standing, and we’re aware of the challenge that is in front of us.”

Mainieri did have a point. Almost everything that could go wrong for the Tigers, did.

They fell behind early. Their starting pitcher left the game in the third inning with an injury, and a parade of relievers issued a dozen walks. The team’s normally potent lineup only managed one run — its lowest total in two months — and four hits.

“Started out with bad luck with (Eric Walker’s) injury, and after about the fifth inning we didn’t play very well and I thought Oregon State was really outstanding,” Mainieri said.

Now, the task is finding a way to do something hardly anyone has been able to do this season — beat Oregon State. The Beavers come into Friday’s game with a 23-game winning streak that matches the one they had earlier this season.

A victory will send Oregon State to its first CWS championship series since it won the second of two consecutive national titles in 2007.

LSU got to this point thanks to a dominant performance by senior Jared Poche’ in a 7-4 win over Florida State on Wednesday and will have its other ace available for Friday’s game.

Junior Alex Lange, a first-round draft pick of the Chicago Cubs, will take the hill to try and keep the Tigers alive for at least another day.

In Lange’s first start of the College World Series, he allowed four runs and struck out eight in six innings in a 5-4 win over Florida State.

“He’s a first-round draft pick for a reason,” Oregon State coach Pat Casey said at a press conference Thursday. “He’s a power arm that’s going to be in the big leagues probably in a real short period of time. He’s really, really good.”

Speaking of power, the Tigers seem to be embracing the power of hair during their extended stay in Omaha. Several players have dyed their hair or gotten wild haircuts this week.

That list includes hard-throwing closer Zack Hess, whose fastball tops out at 98 mph. Hess got a haircut resembling Charlie Sheen’s from the movie “Major Lague,” and teammate Kramer Robertson said he has a personality to match.

“I think he got some extra velocity from his new haircut, some extra confidence,” Robertson said after Wednesday’s win over Florida State. “But he’s awesome. I was saying the other day, borderline psychotic, but that’s what you want, a guy to go out in the ninth inning. I don’t talk to him. I’ve tried to in the past when we go out there, but I don’t say anything to him anymore. I let him do his thing.”