Lady Vikes picking up where they left off 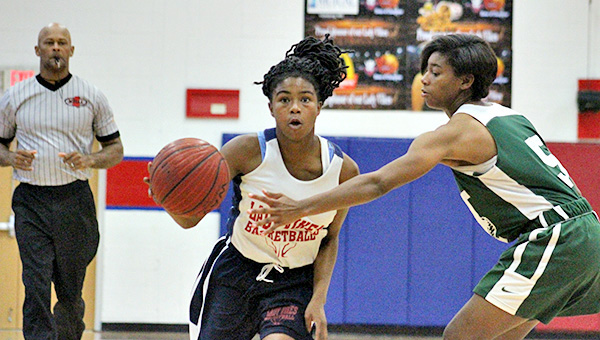 For two years, Warren Central’s girls’ basketball team has been on the rise. It has gone 41-21 in that span and reached the second round of the Class 6A playoffs in 2016-17, where it lost to eventual state champion Olive Branch in a hard-fought game.

When the 2017-18 season begins in November, however, it’ll be do or die time for the Lady Vikes. They have seven returning seniors, all five starters back, and a sense of urgency to win before the window closes on this group. That process has started this month, as they roll through a busy summer schedule of practices and scrimmages designed to shore up their weaknesses, enhance their strengths, and give a little boost heading into a season loaded with anticipation.

“We’re carrying a lot back. We only lost one senior,” coach Jackie Martin-Glass said. “We have so many people coming back, and even from the ninth grade I’ve got a couple of weapons coming up that I can look to to come in and give me some support. I think we’re going to do pretty well if everybody’s focused and we’re healthy.”

Among the things Martin-Glass said she wants to work on is defense. The Lady Vikes allowed just 36.4 points per game last season, but the coach seemed convinced they can do even better. She’s trying to install a couple of new weapons to the arsenal this summer to get it done.

“We don’t see man much, but some of the teams I saw that made it far in the playoffs actually played man. So I want to implement that,” Martin-Glass said. “Mainly, I want to stress defense. I’m trying to get my girls to be more aggressive on the ball, help side and rotate right.”

The Lady Vikes certainly looked impressive in their latest outing. On Wednesday, they swept a doubleheader at home by beating Raymond 62-19 and crosstown rival Vicksburg 62-38.

Against Vicksburg, the Lady Vikes allowed just 25 points over the last three quarters and change after falling behind 13-7 late in the first.

“I saw some good and some bad,” Martin-Glass said. “I think we got a little lackadaisical the second game being that it’s a crosstown rivalry. We were a little sluggish and playing around some. But we had just had a pretty good game against Raymond with some good execution. It was a chance for us to get up and get down and see what we’ve got.”

Another goal for this summer is creating some depth and a roster that can carry on after this year’s large senior class is gone.

Among the players seeing significant playing time off the bench on Wednesday were sophomores Aniya Sanders, Michelle Liu, Cabria Barnes and Ty’Kira Wilson. The junior varsity team has also played a full slate of games on its own this June while the varsity team plays a separate schedule.

“We’re just trying to get some games in, and build some chemistry and get some of the younger girls on the court,” Martin-Glass said. “Trying to build a JV team up so they can look for some replacements once they leave. It’s all about rebuilding from the bottom up.”