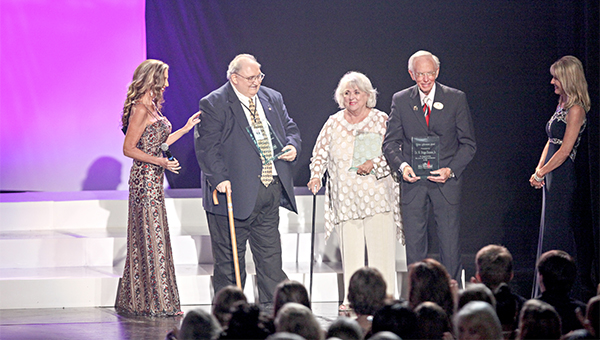 By Tim Reeves and Brandon O’Connor

For decades, the Miss Mississippi Pageant had among its leadership three people who, in many ways, started from the ground up with the pageant.

Friday evening, those three people, many would say, helped lead the Vicksburg-based pageant organization to the level it has achieved today.

During Friday’s pageant performance, Dr. Briggs and Pat Hopson and Joe Savage, were presented with the pageant’s lifetime achievement awards.

Savage was humbled by the honor, having contributed to the pageant for as long as he did because of the scholarship opportunities to the contestants.

“Thank you, but there’s a lot of other people who came before me after me, who have done as much,” Savage said, thinking back on when he was notified of the lifetime honor. “But I appreciate the recognition. It is a work of love and I did not do it to get an award.”

In 1973, Pat Hopson was invited to be a hostess for the pageant, and was named senior hostess in 1976. That role, that year, ultimately led to her joining Miss Mississippi Bobbye Wood to the Miss America Pageant in Atlantic City, N.J.

After that experience, Pat realized the need for local organization to help in the development and coaching of each Miss Mississippi as they travel to the Miss America Pageant. And, to make that happen, she and her husband, Dr. Hopson, opened their home.

Among other contributions to the pageant, in 1993, along with Dr. Hopson, she became a franchise holder, vice president, Miss Mississippi Corp. and executive producer of the pageant. Under her leadership, the live broadcast of the pageant earned 11 nominations and three Emmys.

“Especially being the first ever given, it is very meaningful, and quite an honor,” Pat said. “We certainly appreciate it. I’ve done 44 years and my husband 43. It has been a labor of love the entire time.  It is something we’ve enjoyed doing. It has been a blessing. We just have a lot of rewards from doing it from all the daughters we’ve had over the years, living with us, working with us and the success we’ve seen them have. The blessings have been many and this is the topping on the cake.“

As for Dr. Hopson, he joined the Miss Mississippi Pageant in 1976, and never missed a single year until his retirement from the pageant in 2016.

During that time, he served as the “Pageant Physician,” a position he held for most of his years serving the pageant.

Hopson was chosen by the Jaycees — when that organization ran the pageant — to join the pageant board of trustees and later became chairman of the board for 24 years.

“I get chill bumps just thinking about it,” Dr. Hopson said of  receiving the award. “I was just so, so pleased when they told us they were giving us the award.”

Savage started his partnership with the pageant as a member of the pageant production staff in 1971. Since then, over the next 47 years, Savage has served in numerous positions and, according to the Pageant, held nearly every chair and office in the pageant organization.

He also has served on the Pageant Board of Trustees for 35 years and the served as scholarship chair from 1994 until 2006.

In addition to his service behind the scenes, Savage has helped document the pageants with photographs and video.

Editor’s note:This story is being republished to correct the names of Dr. Pat Briggs and Pat Hopson. The Post apologizes for the error and joins all of Vicksburg in congratulating the Hopsons and Joe Savage for the honor they received from the Miss Mississippi Pageant.