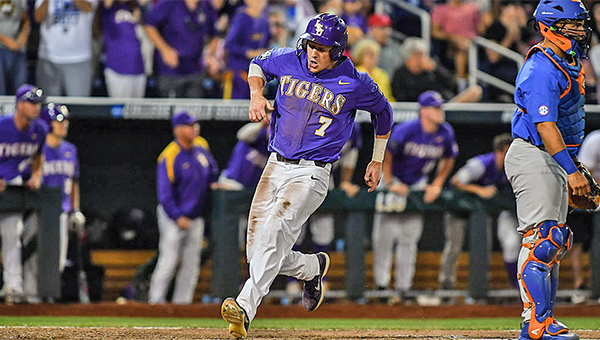 Greg Deichmann comes around to score one of LSU’s three runs in their 4-3 loss to Florida in game one of the best of three College World Series Final Monday. The teams return to the field for game two Tuesday. (Chris Parent/LSU Athletics)

OMAHA, Neb. (AP) — Florida got a dominant performance from Brady Singer, a big defensive play when LSU was threatening and just enough offense.

Now, after a 4-3 win in Game 1 of the College World Series on Monday night, the Gators are one win from their first national championship in baseball.

“We’ve got to play better if we want to win this thing,” Florida coach Kevin O’Sullivan said. “It’s not near over. We got six hits tonight, and Brady had to pitch his tail off. It’s exciting to have Game 1 under our belt … but we haven’t crossed the line yet.”

LSU’s Greg Deichmann said he and his teammates haven’t had their confidence dented. Poche’ (12-3) will pitch against Tyler Dyson (3-0) on Tuesday night.

“We’re not hanging our heads about anything,” he said. “We had a lot of great stuff we did tonight. We had a couple of tough breaks that didn’t go our way. We’re going to come out tomorrow with a lot of positivity, energy and get after it.”

Singer struck out a career-high 12 in seven innings before turning the game over to closer Michael Byrne, who picked up his nation-leading 19th save for the Gators (51-19). The Gators improved to 19-7 in one-run games.

Singer relied on his fastball the first time through LSU’s batting order and cleverly mixed in sliders the rest of the way.

“I felt like I was landing it a lot more for strikes than I usually do,” he said. “The slider did feel good.”

His strikeout total was the highest by a single pitcher in a CWS finals game. Singer (9-5) limited LSU (52-19)  to three singles before Antoine Duplantis homered in the sixth.

Singer, who pitched a complete game in an 8-1 win over LSU in March, turned in his second strong performance at the CWS. The sophomore struck out nine and allowed one run in seven innings against Louisville last Tuesday. Monday marked the eighth straight game that Florida pitchers struck out 11 or more.

“My feelings are that we went up against who I believe to be maybe the best pitcher I’ve seen in the SEC for an opponent since I’ve been the coach at LSU,” Tigers coach Paul Mainieri said.

“I think the guy will be the first pick in the draft next year, and we were having to piece it together with our bullpen guys. It was amazing we were right there and had a chance to win.”

Singer left with a 4-2 lead after Deichmann doubled leading off the eighth. With fans clad in purple and gold chanting “L-S-U, L-S-U,” Josh Smith sent Byrne’s pitch into the right-center gap to drive in Deichmann. But Smith was thrown out trying for second by Nick Horvath, who entered as a pinch runner in the top of the eighth and stayed in the game as the center fielder.

“That play changed the whole complexion of the game,” O’Sullivan said.

LSU — playing its fourth game in six days and with Eric Walker out with an injury — turned to the seldom-used Russell Reynolds (1-2) to start.

The fifth-year senior, wearing a close-cropped Mohawk under his cap and throwing an 85 mph fastball, gave the Tigers three shutout innings in his first start since March 2015.

He got a groundout to start the fourth but then walked three straight. That’s when Mainieri called on Nick Bush, who gave up Jonathan India’s two-run ground-rule double for a 3-0 lead.

“If you would have told me before the game we would get three shutout innings from (Reynolds), I would have been pleased,” Mainieri said. “I got a little greedy there and tried to get an extra inning out of him. I should have started the fourth with Nick.”