Jernigan overcomes plenty on his way to Ph.D. 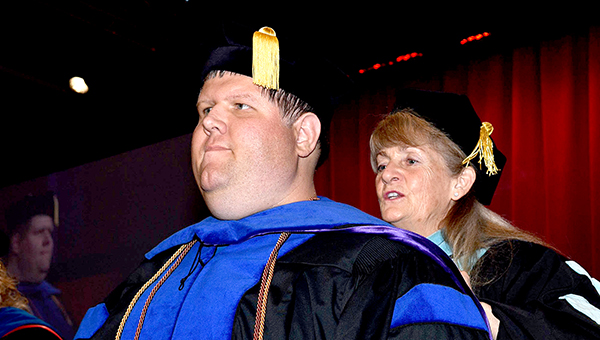 Vicksburg resident Joe Jernigan graduated with his doctorate from Capella University in May.

Joe Jernigan’s entire life story can be summed up in one word — perseverance.

Born with hydrocephalus and spina bifida, which went undiagnosed for six months, he wasn’t expected to survive, and if he did the doctor’s expected him to have a severe mental handicap.

Growing up, Jernigan underwent 19 shunt revisions to help manage his hydrocephalus, which causes fluid to build-up within the brain, two bouts with spinal meningitis, two seizures and a coma that lasted a few days when he was 18-months-old.

Not only did he survive through it all, but Jernigan, who lives in Vicksburg, beat the odds and graduated from Capella University in May in a Ph.D. in instructional design for online learning.

“Throughout my elementary school years, it took the assistance of my mother who was given the option to either put me in a special school for the physically and mentally challenged that was funded by the county, or go to school with me and take care of my mental and physical needs at the school,” Jernigan said.

His mom attended school with him everyday for seven years until the American Disabilities Act was passed in 1990 and he was able to get the necessary help.

“I can’t say it was weird, I always noticed that it was different, because I didn’t see any of the other mothers unless it was a special event,” he said. “I didn’t notice anything bad about it. I am glad she was there.

“It means a lot because without her, I wouldn’t have gotten my foundational proficiencies for my education or learned basic life skills.”

Jernigan, who was able function on his own at school starting in junior high, graduated from high school at 19, before receiving two associates’ degrees from Pensacola State College.

Even his road to his associates’ degrees was met with challenges though as he suffered a near fatal accident that hampered his ability to use his dominant left hand at 21.

“I fell through a plate-glass shower door and nearly severed my arm in two different places,” he said. “It was kind of rough. Whenever that accident happened, it caused the school to put me on a medical hold. So I had to learn to write quickly to be able to keep from losing my scholarship. I practiced several hours a day for six weeks straight until I could get my writing up.”

He had finished his bachelor’s in information technology with a specialization in e-Learning Support Systems from the University of West Florida by 23, and by 25, he finished his first of two master’s degrees from UWF, despite a blood clot that limited him for 14-months.

A lifetime spent persevering through challenges and fighting to obtain an education, led Jernigan to pursue a career in the education field. He currently serves as a curriculum designer at Belhaven University, a position he has held since 2014.

“Education means a lot to me because of the knowledge you gain,” Jernigan said. “Not the degree levels you obtain, they are achievements to be proud of course, but to me the knowledge that I’ve gained in obtaining the degrees is the most important thing and being able to apply it to help others.”