Luckett: Capitalize on what you’ve got 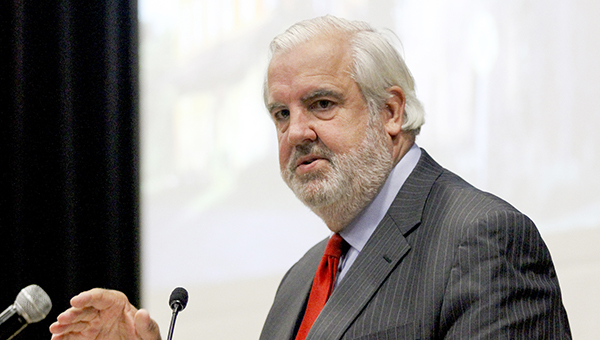 Our cultural history and the many historical structures are an important part of what attracts tourists — and their dollars — to Vicksburg.

However, buildings and history can slip away if they are not cared for.

The goal of the Heritage Guild of Vicksburg and Warren County is to affirm and expand the support for historic preservation of cultural history and architecture, and on Wednesday, the group held its annual community meeting.

During the event, William “Bill” Luckett, the colorful mayor of Clarksdale, served as the guest speaker.

Luckett is an attorney, builder, restorer and preservationist, and he has been instrumental in improving the infrastructure and appearance of his hometown. He lost his seat in that city’s recent election and will be mayor for only one more week.

Luckett said his love of restoring old buildings started when he was a teen, and now he has saved many of Clarksdale’s historic buildings from certain ruin.

“There is nothing like the thrill and energy I get from backing up from a building I have just saved. It just gives me a charge that I probably added another 50 years to something that may have just had six months left,” he said.

During a Powerpoint presentation, Luckett displayed many of these properties he has breathed new life into, including the former Madidi restaurant and Ground Zero Blues Club, of which he is partners with actor Morgan Freeman.

In addition to encouraging Vicksburg residents to invest in its historical structures, Luckett also stressed many of the city’s other unique traits, such as its musical history and its proximity to the Mississippi River.

“People are interested in what we have to offer in Mississippi, and in Vicksburg you probably have more to offer than any city in this state. You not only have the Blues background, you are at the foot of the historically David Cohen-named Delta (which runs) from the lobby of the Hotel Peabody to Catfish Row right here in Vicksburg, Mississippi, and you’ve got the most prolific Blues songwriter in history, Willie Dixon, right here,” Luckett said.

“Vicksburg is a beautiful, beautiful city, like a lot of Mississippi towns and cities, and it has so much to offer that ya’ll can capitalize on,” he said.

Following Luckett’s presentation, Heritage Guild board president Joyce Clingan said she was excited about the number of people who came out to the event to show their support for the group.

“This was awesome. We are very appreciative of the people who took their time to come out to the program,” Clingan said.

The Guild is a 501(c)(3) not-for-profit organization and is seeking donations and support from the community.

“This involves all of us, and the future is in our hands,” Clingan said.

For information about the Heritage Guild or to become a member, email heritageguildvbg@aol.com.

Big Black out of its banks