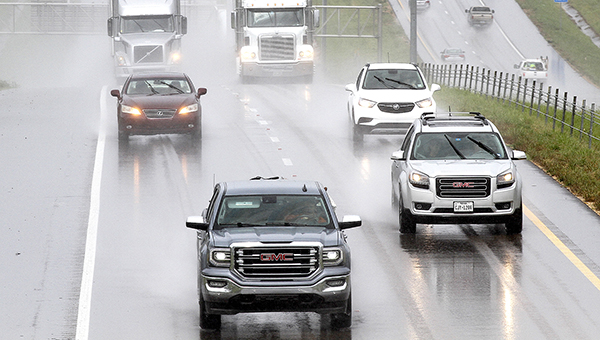 Vehicles travel on Interstate 20 Thursday afternoon through a summer rain shower. AAA predicts more than 37 million travelers will take to the highways this weekend to enjoy the four-day, Fourth of July weekend. (Courtland Wells | The Vicksburg Post)

Beginning Saturday, Mississippi drivers will have to follow three new laws aimed at keeping drivers and their passengers safe.

One of the new laws will require all occupants in a car to be fastened by a seatbelt. Before the change, only the driver and front passenger were required to wear their seatbelts.

“The problem we were having was, other people were wearing seatbelts inside the vehicle and some people were not and during crashes, the people that were not restrained bodies was thrown into the people that were seat belted. It was still causing deaths or serious injuries,” Mississippi Highway Patrol Public Information Officer Eric Henry said. “We’re pretty much hoping with this law, we can have a better chance of saving lives.”

In conjunction with the seatbelt law, it will now be illegal for passengers to ride in the back of a pick-up truck on any public Mississippi road “that vehicles are authorized to drive on, state highways, federal, city streets,” Henry said.

“I believe that the law states that anybody that is in a vehicle in motion is required to be restrained,” Henry said. “If you have people that are riding on the back of a pick-up, that driver will be in violation, because they’re not buckled up inside the vehicle.”

The driver of the car will be liable for unbuckled passengers and could face a $25 ticket plus local fees.

“It could be a person that is 14 years old that isn’t buckled up and you can’t give a 14 year old a ticket,” Henry said. “The driver inside the vehicle is responsible for everybody inside.”

Also on Saturday, riding in the left lane of a four-lane highway, unless you are passing another driver or preparing to make a left-hand turn, will become a ticketable offense in Mississippi.

“After you pass a vehicle on a four-lane highway, you are to move to the right-hand lane,” Henry said. “Basically this law prevents road rages. You have a lot of people who get upset when a person is driving in the left lane and they’re holding up traffic. Then it escalates to a whole other different situation. Hopefully this law will calm down the situation.”

All police departments include city and Highway Patrol that have authority to police the highway will be able to enforce the left lane law Henry said.