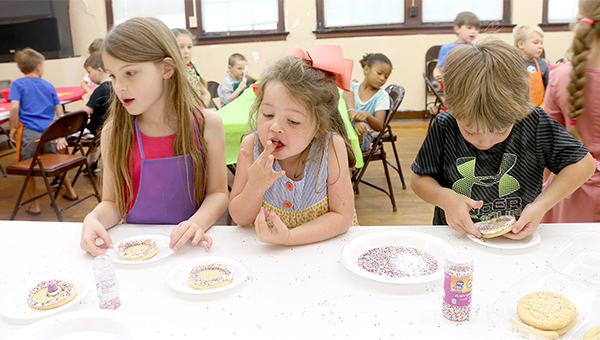 This week, the Southern Cultural Heritage Center hosted a “Cook with Books” camp for children.

“Every day we read a different children’s book,” instructor for the camp Margie Heltzel said, and then we made recipes that paired with the story.

On Tuesday, “Dragons Love Tacos” was the book that was read, and afterward, the children prepared tacos, homemade tortilla chips, sombrero cookies and cactus juice.

“Some people had posted on Facebook that they wanted a cooking camp for children,” Heltzel said, and the SCHF was willing to host them.

Helping Heltzel out during the camp were assistants Sara Pratt and Laura Kidder.

Pratt, who is a student at St. Aloysius, helped entertain the children when it was others’ turn to make their sombrero cookies and tacos.

Kidder’s job was to man the SCHC kitchen, and on Tuesday she was browning the meat for that would be used for the tacos.

Camper Morgan Tzotzolas said her favorite thing about the cooking camp was making the “jello thing.”

On Monday, Hetlzel said the book the children listened was entitled the “Rainbow Fish” and afterwards they made Rainbow Fish Crunch, Sea Snails and Rainbow Friendship Fruit Salad.

“It was real cool,” Tzotzolas said.

The “Cook with Books” camp was offered for children ages five to eight.

Hetzel said she would also be offering a “Food from Around the World,” cooking camp July 17 through 21 at the SCHC.

The registration fee for each class is $125 per child and includes all supplies as well as lots of tasty treats. Space is limited and reservations are required. For more information or to register, call 601-631-2997 or email info@southernculture.org.
Recipes:

Sea salt or seasoning of choice

Pipe a circle of frosting around the perimeter of the cookie. Completely cover the icing with sprinkles, shaking off any extra sprinkles. Pipe a dollop of icing in the center of the cookie and add one gumdrop on top. You just made an edible sombrero!
Cactus Juice

Combine the Hawaiian Punch and Pineapple Fanta in a pitcher. Serve chilled or over ice.

Change turns into a positive for 601 Sports