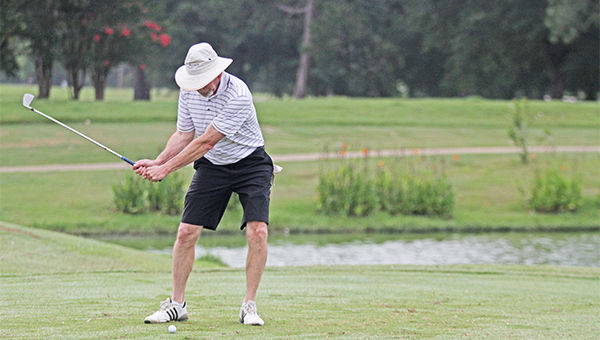 The annual Clear Creek Club Championships got underway Saturday after golfers had to wait an extra week to head out to the course after a rainy weekend forced the tournament to be postponed.

Fifteen golfers competed in the first round of the championship Saturday, with nine competing in the senior division and six taking part in the men’s division.

The tournament is an individual stroke play competition, and the winner in each division will receive a gift card to the Clear Creek Pro Shop. The winner of the men’s division will also earn an automatic spot on the Clear Creek cup team that will compete in the Warren County Cup matches Aug. 19 and 20 at Clear Creek against the team from the Vicksburg Country Club.

The tournament is limited to members of the Clear Creek golf course.

After the first day of play, Channing Curtis held a six-stroke lead over Keith Erhardt in the men’s division after shooting a 1-over par 73 to Erhardt’s 7-over par 79.

“I got a new driver yesterday so I was trying it out. If I had hit a few fairways, I would have played better,” Curtis said. “I made a 15-foot birdie put on No. 2 and No. 3, but I made a kind of stupid mistake on number four. Had a fat chip and ended up leaving myself a really hard par put, missed it and made bogey.”

Two bad lies in the rough led to a double bogey on No. 6 for Curtis, but he said expect for the two holes he bogeyed, he consistently made par throughout the round.

Curtis is trying to win the tournament for the second straight year, and the third time in last four years. Erhardt held a one shot lead of Curtis after the first round last year, but fell well off the pace with an 86 in the second round compared to Curtis’s 69.

“If I hit it straight, I think I’ll play pretty good,” Curtis said of his expectations for Sunday’s round. “I’m hitting my iron and wedges good. I’m putting really good. If I can keep driving good, I can play really good.”

Tom Jones was third in the men’s division following the first round with a 14-over par 86.

Jim Darnell held the lead in the senior division after the first round after scoring a 3-over par 75.

Entering Sunday’s second round, Rodney McHann sits in a close second after scoring a 4-over par 76 Saturday.

Hugh Hasty is in third after an 8-over par 80 in the first round.

“I had a double bogey [on 15], but I managed to survive that,” Darnell said. “I had a couple birdies and mainly just pars.”