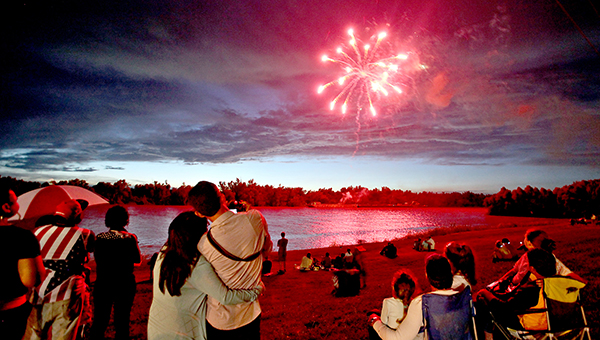 Spectators enjoy the annual Fourth of July fireworks show in July 2015 along the bank of the Yazoo Diversion Canal in downtown Vicksburg. (File Photo)

A night filled with music, fun and fireworks is planned for downtown Vicksburg Tuesday to celebrate the Fourth of July.

The festivities will begin at 7:15 p.m. when Freedom Band takes the stage in front of the Old Train Depot on Levee Street, and culminate with a firework show beginning between 9:15 and 9:30 p.m.

“It is the original Freedom Band from the late ’60s early ’70s,” Joe Graves, the recreation director for Vicksburg, said. “A lot of people I am hoping come watch them. I know a lot of people have already called me enquiring because they had seen them in their heyday when they were with Motown. I do know they’re bringing in a couple extra horn players and they’re excited about coming to Vicksburg and playing. It should be a great, great show.”

The fireworks show will be set off from a barge in the diversion canal with officers from the Warren County Sheriff’s Department and Mississippi Department of Wildlife, Fisheries and Parks patrolling the water to keep it safe.

The show will be set to music that will begin when the first firework is set off.

“It is going to be a terrific show,” Graves said.

He said between 7,000 and 10,000 people are expected downtown, with prime first come first serve seating available on the hill in front of the Old Train Depot.

Vendors will be on hand and set up in the Farmers’ Market lot on Washington Street.