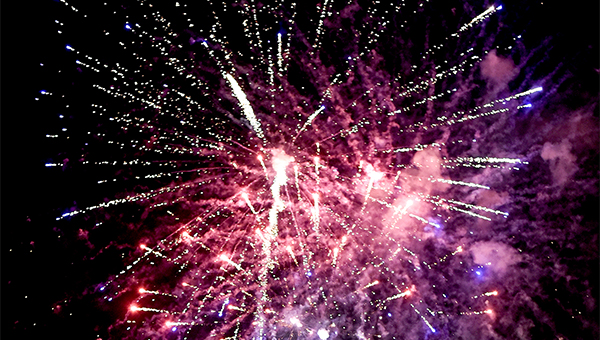 Vicksburg Mayor George Flaggs said he believed Tuesday’s Fourth of July fireworks show in downtown was the biggest he had ever seen.

According to the estimates on the crowd size, he might very well be correct.

City and law enforcement officials estimate that between 10,000 and 14,000 people attended the 2 1/2 hour program.

“It is one of the best shows I have seen us do,” Flaggs said following the show. “And, I am extremely excited about the people who came to Vicksburg from out of town.”

Flaggs said he met visitors from around the region and from out of state.

“The excitement around downtown speaks volumes for the interest in Vicksburg,” Flaggs said.

Downtown Vicksburg director Kim Hopkins said she agreed with the estimates of the crowd size, saying she “saw people everywhere.”

“As I drove around, I saw people all the way from Walnut Street to the waterfront,” Hopkins said. “I saw people on nearly every corner, in the parking garages, along every street. It was packed.”

For many, coming downtown for the show is an annual experience.

“I think it’s a great July 4th experience for the entire family, we come down every year,” Vicksburg resident Tracy Rogers said. “We bring chairs, hang out and enjoy each other’s company and watch the show.”

In addition to being large in numbers, Hopkins said those attending looked to be having a great time.

“One of the things I always enjoy seeing is the kids — and those young at heart — sliding down the hill near the Old Depot Museum,” she said. “It looked like the kids were all having a great time.”

With temperatures in the high 80s when Freedom Band started playing at 7 p.m., Hopkins noticed the crowd was late arriving.

“The crowd did get in later than normal,” she said. “I am sure the heat had something to do with it.”

Maybe that was the only flaw in an evening Flaggs said “went like clockwork.”

That clockwork reportedly continued to long after the show, as the large crowd made their way out of downtown and back home.

“I want to compliment the security, the Vicksburg Police Department and the Sheriff’s Office for their help,” Flaggs said.

Vicksburg Chief of Police Walter Armstrong said his department called in an additional 10 officers to supplement those already on duty Tuesday to help manage the traffic in and around downtown.

“Everything went extremely well during the show and getting traffic out,” Armstrong said. “It was another successful fireworks and show.”

Hopkins, while noting how smooth the event ran, was sure to compliment those in charge.

“Joe Graves has always does a great job,” Hopkins said of Vicksburg’s Park and Recreation director Joe Graves, who is in charge of planning the annual fireworks show. “He did another great job this year.”

ParkView up for sale, with a $2.1M asking price