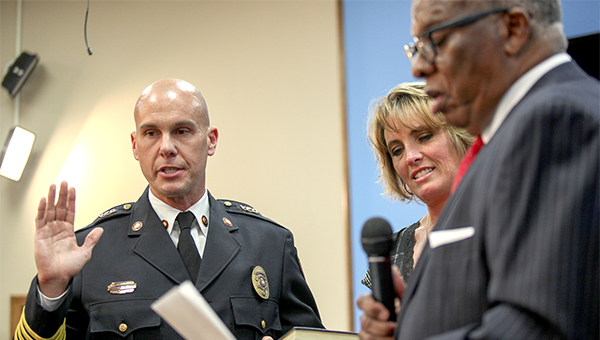 Craig Danczyk, the Vicksburg Fire Department’s current deputy chief, was named fire chief by the Board of Mayor and Aldermen Wednesday, replacing Charles Atkins, who had served in the position for eight years.

Derreck Stamps and Trey Martin were appointed deputy chiefs. The chiefs were part of 19 city officials appointed by the board who took their oaths of office during a ceremony Wednesday afternoon. Milton Moore, the city’s new police chief, and deputy chiefs Bobby Steward and Eric Paymon were also sworn in Wednesday.

Flaggs said he appointed Danczyk on his ability and commitment to the fire department, particular for the firemen themselves, reducing the overtime in the fire department and putting the money saved back into the base salary of the tier system, and improving the fire rating.

Danczyk is a 22-year veteran of the fire department and served as deputy fire chief for 21/2 years.

“In my 21/2 years in administration, working with Chief Atkins, I think we’ve been able to make some positive changes, but looking forward, I’m hoping to scale up a little bit. We had our recent retirement of deputy chief Kenny Daniels, and Capt. Trey Martin will be replacing him.”

Martin, who is a paramedic and a registered nurse, will be over the emergency medical services division.

“I think he’s going to be outstanding in our EMS Division, and I’m real excited about watching our EMS division grow and scale up.”

Danczyk said Stamps’ promotion means hiring a new training officer. Looking long term, he wants a firefighter/paramedic (as training officer) so the department’s employees will be cross-trained in in firefighting and emergency medical.

The department presently has 34 to 35 people per shift, he said, adding, “We are a little short staffed.

“I would like to hire six to 10 more people, and we do have a few people now whose applications are being processed, unfortunately, it’s just not an overnight process with the background checks and just the things you have to do on the pre-employment side, but we do have some trained employees who have applied and we also have some new firefighters who have passed the physical agility test who are being considered.”

Danczyk anticipates the city’s new fire station on Berryman Road off East Clay Street opening in the early fall, “And we’re possibly looking to close station 6 on Cherry Street at that time when we will open the new station, which is much larger on East Clay and then having a new ladder truck coming and go to new fire station.”

“We are excited about the growth on East Clay, the new station on that part of town. I think will be very good for Vicksburg. With other growth in that area of town with the water park and more hotels coming I think we’re in the right place.”

Danczyk worked his way through the ranks before becoming a deputy chief, serving as a battalion chief for five years, and a lieutenant for 41/2 years.”

His experience, he said, has allowed him to understand each position within the department, “And I feel like I’ve been successful at those different ranks, and I look forward to giving somebody else a chance to serve and hiring new people.”

“We really want to make a positive change for the city. This is an exciting four years.”

“In the times we are in, where you have to do more with less, you have to think outside the box a little bit, he said. “Budgets are limited, and regardless of your budget, whether its good or bad, you have to make positive change with the money you have available. And if you don’t have a lot of money available, you’re still obligated to make positive decisions.

“You don’t always have budgets that can satisfy all your wants, but you definitely want to satisfy as many needs as you can, and I think we’ve done that and I think we will continue to do that,” he said.

“I’m excited, I’m genuinely excited. I’ve been blessed I’ve got to spend my whole career at the Vicksburg Fire Department, and I would love to keep doing that for the next 10-12 years.

Other appointed officials sworn in included: