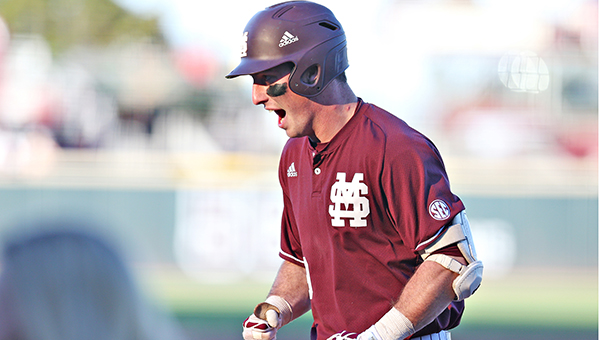 BIRMINGHAM, Ala. (AP) — One week after becoming just the second player ever to win the Southeastern Conference triple crown, Brent Rooker laid claim to yet another honor.

Rooker, Mississippi State’s slugging first baseman, was named the 2017 Roy F. Kramer Male Athlete of the Year by the SEC on Wednesday.

Rooker was selected by a vote of the league’s athletics directors. He joins baseball player Will Clark (1985) and women’s basketball player LaToya Thomas (2003) as the only Bulldogs to claim the SEC’s Athlete of the Year Award.

The Germantown, Tennessee native was also named National Player of the Year by Collegiate Baseball and became MSU’s first-ever SEC Player of the Year, in addition to First Team All-America honors from five publications.

Rooker was a first-round pick by the Minnesota Twins in the 2017 Major League Baseball draft. He also won the Ferriss Trophy as the best amateur baseball player in Mississippi, was named First Team All-SEC and was a finalist for the Golden Spikes Award and Dick Howser Trophy.

Rooker finished his stellar season with a .387 batting average and a school record 30 doubles. His 96 hits was eighth on the program’s single-season list, while his 23 home runs ranked fifth in the MSU record book.

For the year, Rooker became the first player in SEC history to record 20 home runs, 30 doubles and 75 RBIs in a single season and the first Division I player to accomplish the feat since Clemson’s Khalil Greene in 2002.
Georgia track and field athlete Kendell Williams was the SEC’s Female Athlete of the Year.

Williams won the Honda Award for track and field after winning her third NCAA heptathlon title in four years. She ended her college career with seven national championships.

Williams also won the heptathlon at the USATF Outdoor Championships.