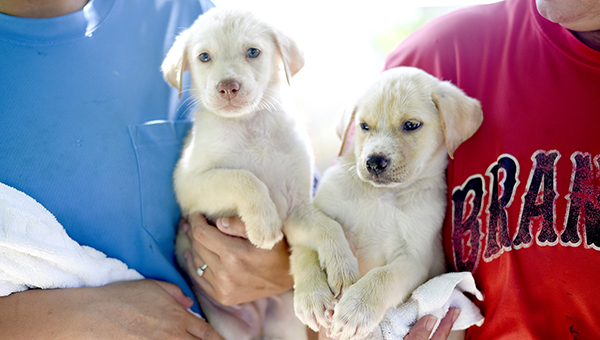 Lab-mix puppies, stolen from the Vicksburg-Warren Humane Society on July 1, were found and retuned by officers Monday. Four people were arrested and charged in the theft. (Courtland Wells | The Vicksburg Post)

Lacey Smith, 18, and Claude Friley, 24, were arrested along with two juveniles whose names were not released.

Smith was released from the Warren County Jail Wednesday on a $1,000 bond, but as of Friday, Friley was still in custody. His bond was also set at $1,000 by Municipal Judge Toni Terrett. The juveniles were placed in detention at the Warren County Youth Detention facility.

“Saturday, July 1, at around 8:15 at night, a carload of people pulled up,” Georgia Lynn, executive director of the Vicksburg-Warren Humane Society, said. “They walked around and then they stole two of our puppies outside. They lifted the kennel up, took them out, put them under their shirt and left with them.”

The theft was discovered on Monday and an arrest was made with the help of surveillance cameras that were installed at the shelter in June.

“I called the police and they came down and started researching the video and the vehicle they were in,” Lynn said. “Within a couple hours, they had four of them in custody.”

The cameras were installed at the shelter due to a consistent problem of people trespassing at the shelter at night and illegally dumping unwanted animals.

The cameras went up June 8,” Lynn said. “In 28 days since the camera got going, we have had 45 trespassers. The last straw for me getting the cameras was because people kept stealing the dogs from here. We didn’t know what they were doing with them. Right before the cameras were installed, we had three puppies stolen the week before.”

Lynn said the 45 trespassers have included people dumping animals, stealing plants and dumping trash as well as the theft on Saturday.

She estimated that during the 28-day period people have illegally dumped 20 animals at the shelter including one Wednesday.

Lynn is asking for the public’s help in identifying two suspects who illegally dumped dogs at the Humane Society Thursday and Friday.

Thursday morning, a Hispanic woman, with short dark hair, drove onto the Humane Society’s property around 7:40 a.m. in an older model blue Chevrolet Z71 with three blue barrels in the back.

“She got out of her truck, took the puppy from the bed of the truck, and dragged it across our property,” Lynn said. “She then tied it to one of our outside kennels. The puppy was not given any water. The puppy is a white lab mix and is approximately 8 months to a year old.”

They are also looking for a suspect who dumped a black and white Chihuahua-mix at the shelter Friday.

The suspect was driving a white 1990s model Mustang.

“This car pulled on our property Friday morning before we opened and threw out this poor dog,” Lynn said. “She is very old with what appears to be a skin allergy, is overweight and partially blind. The dog actually got out in the road and a passerby turned around and informed us that the little dog had been thrown out. We now have the dog safe in the shelter.”

The shelter is offering a reward for anyone who can provide information leading to a conviction for trespassing.

VCC preparing for roaring Ritz on the River