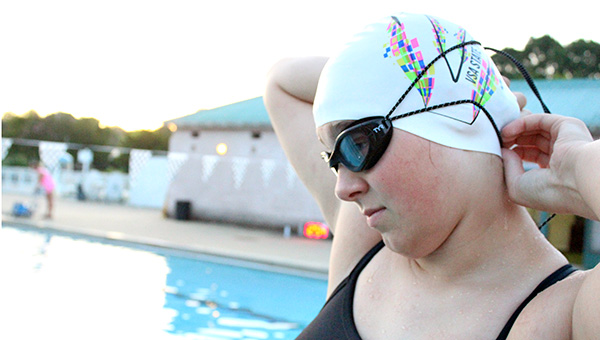 Leah Larson adjusts her cap and goggles before practice with the Vicksburg Swim Association Wednesday at City Pool. The VSA will host its annual Last Chance Meet Saturday at 9 a.m. at City Pool. The meet gives swimmers a final opportunity to achieve a qualifying time for the Mississippi Swimming, Inc. state meet July 20-23 in Tupelo. (Ernest Bowker/The Vicksburg Post)

After enjoying a weekend of sun and fun on the beaches of Florida, the Vicksburg Swim Association’s Killer Whales are returning to the banks of the Mississippi ready to get down to business.

Coming off a third-place finish at the Greater Pensacola Aquatics Club Invitational in Florida, the VSA squad will host its own Last Chance Meet Saturday morning at City Pool.

The event provides a literal last chance for swimmers to make a qualifying time for the Mississippi Swimming, Inc. state meet two weeks from now, as well as one last competitive summer season swim for those who don’t make the time required to advance.

“I’m going to have everybody swim because there’s a break between now and the next scheduled meet in September. They tend to lose focus, so it’s a chance to get some swims in,” VSA coach Mathew Mixon said. “The kids that have made a state time, we’re going to get them to swim a couple of 50s and have some fun with it. Almost everything at the state meet is 100s. It’ll get them in the pool on a Saturday morning and won’t be too taxing on them.”

Saturday’s meet will be more against the clock than outside competition. Because of conflicting schedules and a couple of other meets around the state, Mixon expected almost all of the swimmers in the meet to come from the ranks of the VSA.

A few other teams could send handfuls of swimmers before the entry deadline, but Mixon still jokingly referred to it as “an intrasquad scrimmage.”

Even if it’s a one-team show, however, it is still an official meet and the times count for state qualifying.

“It’s not like the Stamm meet,” Mixon said, referring to the annual meet at City Pool that draws about 10 teams per year. “It’s more of a, ‘Hey, we’re going to do it so the kids have a chance to qualify.”

The Killer Whales have already had a solid summer and are building momentum as they prepare for the state meet in Tupelo July 20-23. They won the Stamm Invitational for the first time in June, and finished third out of 15 teams from Florida, Alabama and Tennessee at the GPAC Invitational last weekend.

The Killer Whales only had a travel roster of 21 swimmers — the full roster has about 60 — and were the only team from Mississippi in the meet.

“For traveling 5 ½ hours, that was a great showing. If we had taken the whole team we might have been in the top three,” Mixon said. “It was a great meet. I was happy with the overall team placement. Mississippi is not known for having the strongest swimming programs. Our sectional qualifying time is like Florida’s state qualifying time. So swimming against teams from Florida and other states and doing well was great.”

Among the stars of the Pensacola meet for the VSA were Rachel Jolly and Beau Harris. Jolly, a 19-year-old likely competing in her last meet, won the girls’ 13-and-over 1,500-meter freestyle. Harris, swimming in the boys’ 12-and-under division, posted six state qualifying times.

Tony Fields also did well, placing second in the 100 meter freestyle and third in the 200 freestyle in the boys’ 12-and-under division.

Now, Mixon said, it’s time for the rest of the team to roll up its sleeves and begin working toward the goal of a state championship later this month.

“This meet, we had fun. We had a beach day. We were out in the sun all day,” he said, adding with a laugh and a glance toward his swimmers warming up in the cool waters of City Pool, “That’s not what we’re going to do at the state meet.”

CITY POOL CLOSED SATURDAY
City Pool will be closed to the public on Saturday to host the Vicksburg Swim Association’s Last Chance Meet. The meet begins at 9 a.m. and continue into the afternoon.
City Pool will reopen for recreational swimming Sunday at 1 p.m.

Federico takes over as ULM coach