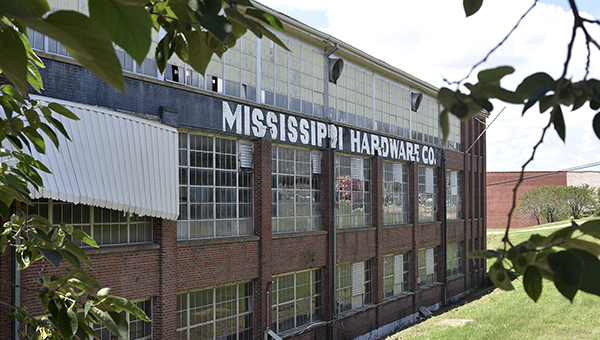 Local, state and federal groups and agencies are working on a plan that could renovate the Mississippi Hardware Co. building into an innovation and tech transfer center. (Courtland Wells/The Vicksburg Post)

The city of Vicksburg is seeking more than $500,000 in federal grant funds to upgrade and improve the city-owned parking area at the old Mississippi Hardware building at the corner of Washington and Depot streets as part of a plan to transform the building into high tech center.

The Board of Mayor and Aldermen Wednesday approved applying for $547,867 in State Economic Development Assistant Program grant funds through the Delta Regional Authority to pay for the project as part of a plan to renovate the former hardware building into an innovation and tech transfer center to serve the Vicksburg area and the entire central Mississippi region.

“The idea is that we create a space within downtown where we can work to attract small and middle-sized businesses that would do anything from research and technology transfer and could potentially work in federal-type programs,” Pablo Diaz, executive director of the Vicksburg-Warren County Chamber of Commerce, said Thursday.

“The idea really comes from the presence of the federal entities (U.S. Army Corps of Engineers and the Army’s Engineering Research and Development Center) here, and providing a venue where companies could have a place where they could gravitate more to try and access those contracts and be part of Vicksburg and create jobs here as they do that.”

Diaz said the high tech aspect would be one component of the project.

Technology transfer, he said, involves applying the research to produce an actual product and manufacturing. “It’s really from research to commercialization, and this innovation and tech transfer center would be an avenue to facilitate that step.”

According to a press release on the project, Diaz said private investors with an excellent record of success in the development of real estate are working closely with local elected officials, the chamber and a number of community leaders, on a project that could see the building redeveloped into an innovation and tech transfer center.

He would not name the parties involved in the project.

Diaz described the project as a transformational opportunity for Vicksburg and Warren County, and as a chance to change the rules in terms economic development in favor of an approach that elevates the unique quality of life Vicksburg has to offer and the professional talent concentrated in the Greater Vicksburg region.

According to Diaz, a number of leaders at the state and local level have been working to develop a framework that would make the project a success, and the Delta Regional Authority is one of those partners.

The Mississippi Hardware building has been vacant since closing in October 2013, and its future use has been a topic of speculation since, including the possibility the building would be converted into a hotel to serve the Vicksburg Convention Center, which sits on the west side of Mulberry Street across from the building.

Mississippi Hardware was known as an outlet for hard-to-find tools such as wrench sockets, drill bits and off-size nails, and the building was the store’s third location since its establishment in 1935.