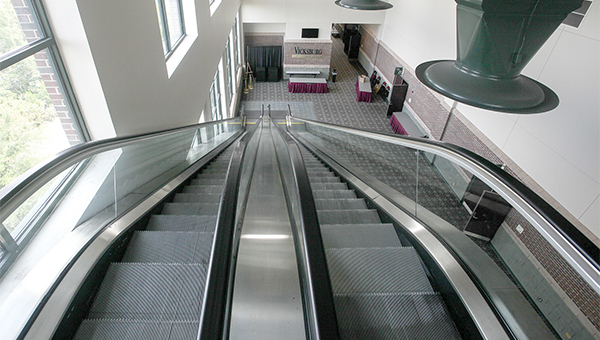 CONSTANT ISSUE: One of the projects planned for the Vicksburg Convention Center is replacing the escalator, which is costing the city an average of $1,500 a month to maintain. (File Photo/The Vicksburg Post)

All of this worry has come from the center’s escalator, which for some time has experienced failures, racked up maintenance and repair costs, and at times forced center officials to go to a plan B and C on how to get guests to the exhibition hall.

In late 2016, city officials decided to replace the escalator with a new one, budgeting $800,000 for the project. The problem was the quote for replacement came back well more than $1 million.

Since then, there have been conversations about still replacing it with a new escalator or stairs.

But now, understanding that such a construction project would limit the center’s ability to get guests to and from the lower levels of the convention center, officials are now looking at adding another, larger elevator.

“The latest meeting we had, everyone left researching,” Kirklin said of a meeting with city officials in April. “But, whether we get a new escalator or not, the very first phase we wanted to look at was getting a new elevator that was a larger elevator.

“That way, when there is construction to either replace the escalator or build stairs, there would be a way to get people up and down during the construction phase.”

Kirklin said the city is already speaking with architects about the new elevator and are looking at the fall as a timeline for plans being finalized and bids being awarded.

As for the current escalator, it continues to be a problem. During the days leading up to the Miss Mississippi Pageant, the escalator was not working, forcing center officials to call in another service call.

Now, they are dealing with an escalator that is very loud.

I go down the hall, not even halfway down the hall, and it is so loud,” Kirklin said. “And, we are showing off the building Thursday for Ritz on the River and it doesn’t need to be so loud.”

Kirklin said the escalator was worked on late last week, but is still “clanking.”

“One of the problems right now is that it needs to be better taken care of,” she said. “It is 20 years old and there are a lot of things that have been replaced.”

She estimates the center is spending around $1,500 per month in maintaining the escalator now.

But, through the problems, Kirklin said the city’s administration has made getting this problem resolved a priority.

“The city has been very supportive,” she said. “They understand it is about the guest experience and when you have to send visitors down a stairwell in a back hallway to get to your event, it is not the best experience.”