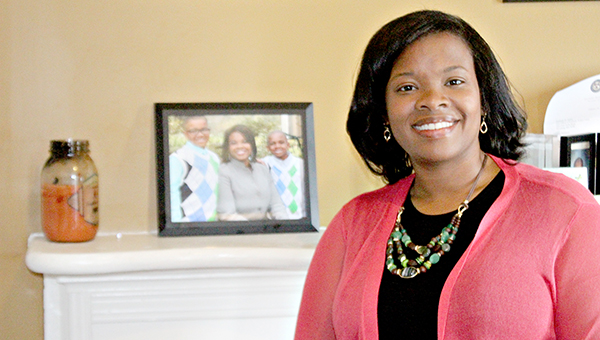 Not long after returning to Vicksburg to begin her law practice, Kim Nailor had a first-hand experience with the CAP Center —Child and Parent Center Inc. — and was impressed with the agency’s work, starting a relationship that has continued to grow.

Nailor has been a member of the CAP Center’s board of directors for three years, and is currently the board’s president.

“The mission of the CAP Center is to help families be rehabilitated,” Nailor said. “We have in Warren County a lot of children who end up being removed from their family’s homes, and so with the CAP Center, our goal is rehabilitation. We offer parenting classes, and a support group to help parents develop the tools needed so they can regain custody of their children.”

“I was able to work along with this client so she would be able to regain custody of her children, and that’s when I became impressed with the CAP Center, because they offer many services to the parents and it’s much needed in this community.

“This mom had been addicted to drugs for years, and she actually went through drug rehabilitation, parenting classes; she did everything that was required to shake the drug addiction and regain custody of their kids.”

The CAP Center staff, Nailor said, helped her client realize she needed to make changes and worked in partnership with her to help her client.

“I was just impressed with how patient they were with her, because she had just been through a lot in her life.”

The CAP Center board, she said, supports the staff and raises money for the center and to hire its staff.

“We also sponsor events for the community. We had our party in the park in May, where we invited children and community leaders to come out, and we just had a good time with different activities for children. We also have an annual luncheon every January where we raise funds, so we raise funds and offer support to the staff.”

It was through the CAP Center that Nailor joined the United Way.

“Linda Fondren asked me to be on the board of directors, and I accepted,” she said. “I had worked with Michele Connally before on programs in the community, so she was familiar with me and she and Linda both wanted me to be a part of the United Way, and I’m glad they did.

The Randy Naylor Memorial Foundation, she said, does a lot of community programs and sponsorships and scholarships.

As a lawyer guardian ad litem, Nailor said, she works with the lay guardian ad litem providing legal advice “because we look at the law and figure out what’s in the best interest of the kid in the law.”

Guardian ad litems represent the child in all youth court hearings. The lay guardian ad litems perform the investigations into the families and the homes, she said, and “they normally have to consult with the attorney so we can be sure we can make a recommendation that’s not only in the best interest of the children, but is also within the confines of the law.”

Serving as a juvenile defender is a different position.

“The court is a court of rehabilitation, and they (juveniles) have to be appointed an attorney to represent them. We have to make sure we find options to help rehabilitate the defendant. These are kids that have committed a crime that if they were an adult, they could possibly be looking at incarceration or paying a fine, and we’re just trying to find alternatives for them.

“Sometimes kids are mischievous, some kids just get caught up in the wrong thing, some kids just make a mistake. They do something, and youth court gives them a second chance so it doesn’t go on their record, because it is a confidential court. So they get a chance to get this behind them so they can move forward and be productive.”

Nailor said serving as a special judge is interesting.

“You find out about the life of children. Sometimes children get labeled as being bad or problematic, but sometimes, some of these kids, when you find out their back story of their lives, you understand why they’re making some of the bad decisions they’re making.”

Outside of her work with juvenile court and her volunteer activities, Nailor is a member of Greater  Grove M.B. Church and spends time with her two sons, who she said are also active in the community. “And I just live; I love to travel, I love to cook, and I love to eat.”

And she plans to continue working with United Way, the CAP Center and the Randy Naylor Memorial Foundation.

“I just think if we all keep doing positive things in the community, we can make our community better,” she said. “We just can’t sit back and complain about things that are going on, and the bad things if we don’t do anything to try and make it better.”