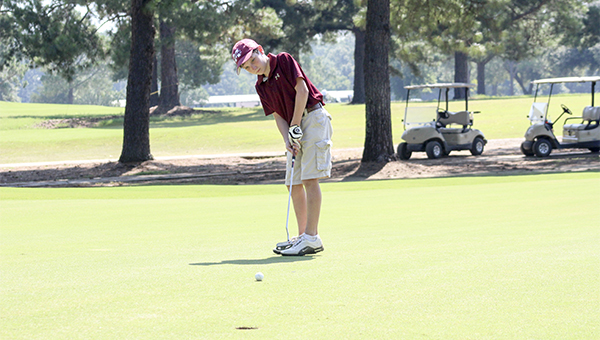 Nicholas Neihaus, 11, competes in the first round of the Warren County Junior Championships at Clear Creek Golf Course Monday.

The busy summer schedule at Clear Creek Golf Course continued Monday with the first round of the Warren County Junior Championships.

Five golfers ranging in age from 10 to 14 braved the heat and humidity to battle through nine rounds with the title of Warren County Junior Champion on the line.

Luke Yocum, 14, and Bryson Whitaker, 13, dueled in the 13-14 age group. Despite temperatures that climbed into the 90s by the end of their round, the duo was given the added challenge of walking the course with their golf bags in tow.

“You definitely tire a little more, but it is not too bad,” Yocum said of walking the course.

Whitaker added, “You get more tired and don’t really have as much power.”

Whitaker held a six shot lead over Yocum at the end of Monday’s round one. He shot a 41, including birdies on Nos. 7 and 9, to Yocum’s 47.

He said that when you are playing well during a round, as he did Monday, “you get adrenaline. You get really excited like you don’t want to stop.”

Yocum was down only one shot after three holes, but shot a bogey on Nos. 4 through 8 and shot par on No. 9 to finish six shots off the lead.

“It was pretty tough just finding the fairways, but wedges weren’t exactly working out for me,” Yocum said.

Three golfers competed in the 10-11 age group with Carson Smith, 10, holding a seven shot lead over Nick Neihaus, 11, after the first round. Smith shot a 55 in the first round to Neihaus’s 62 despite Neihaus having the only bogie free hole of the day out of the trio with a par on No. 4.

Vaughn Hynum, 10, shot a 67 to sit in third place heading into the second round.

The tournament was open to any golfer in Warren County under the age of 18 and the winner will receive a trophy and the title of Warren County Junior Champion.