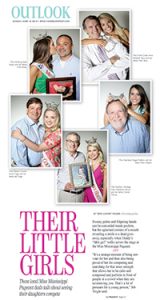 This year’s big winner was sports reporter Ernest Bowker, who earned first place awards for sports news story, “The game has changed,” sports feature story, “Time management,” on the many duties of high school teachers and coaches, and sports feature photo, “At the end of the day.”

“We at The Post, who work alongside these talented people every day, know they are winners. It’s gratifying to see the quality of their work recognized among their peers,” said Jan Griffey, general manager of The Vicksburg Post.

“Each day is a joy to work along these talented journalists, these friends,” Post editor Tim Reeves. “While it is thrilling to see their work honored by their peers, these professionals do their job for the readers of The Post and the residents of Vicksburg and Warren County.”

The 2016 Better Newspaper Contest was judged by volunteers from the Kentucky Press Association. Fifty-one Mississippi newspapers submitted a total of 2,089 entries into this year’s editorial contest.