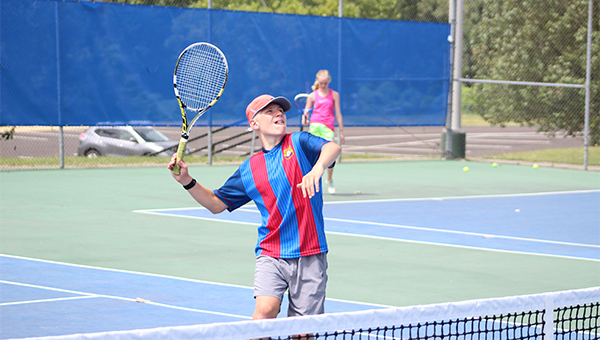 READY TO GO: Adam Eckstein, 15, lines up his shot during the youth tennis camp at Halls Ferry Park Wednesday. He will be one of the local players participating in the Mud Cats Youth Tennis Tournament Friday through Sunday.

More than 35 tennis players between the ages of 10 and 18 will converge on Halls Ferry Park Friday through Sunday for the annual Mud Cats Youth Tennis Tournament.

Players will be divided into age groups and play either in a bracket or round robin, depending on how many players are in the age group. Matches will be best two out of three sets.

“It helps the kids to get better,” youth tennis director Rick Shields. “Most of them are trying to get better for their high school tennis teams. It helps the city of Vicksburg for the economic impact it brings. People staying in hotels. It is a measuring stick to how well they’re progressing.”

Shields has been hosting youth tennis camps at Halls Ferry Park throughout the summer and participants will be playing in the tournament to show off their improvements during the camp.

“There’s a lot of people that come out and its fun to compete with people from all over the state,” Adam Eckstein, 15, who is playing in the tournament, said. “It is fun because you can see how much you have grown over the months you have been practicing. You can really get better and its fun to see it happen.”

Audrey Dennings, 12, said her goal for the tournament is to get her new serve down and to “just to end the summer with a good simple tournament and to reassure that you are still playing.”

City policy: No personal calls, TV while on the…