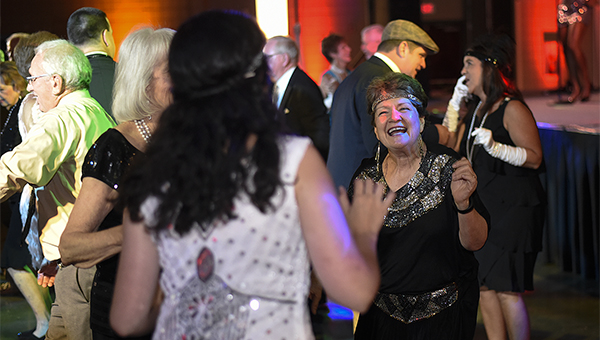 More than 400 people danced the night away to the music of The Downtown Band Thursday evening during the fourth annual Ritz on the River at the Vicksburg Convention Center.

The theme for the night was 1920s to celebrate the 20th anniversary of the VCC, and many of the attendees came decked out in their best 1920s inspired attire.

The event started with a meal prepared by Palmertree Catering and concluded with a two-hour performance by The Downtown Band from Nashville.

“They raved about the food,” VCC executive director Annette Kirklin said about the community’s response.

“They raved about the decorations. Tons of people have raved about the band. They loved the theme of the evening. Seeing people dressed up was a really fun part. We as the VCC team enjoyed seeing everybody participate as they did.”

The Downtown Band played an assortment of music that had people dancing from the first song and even requesting one more song at the end of the evening.

“They were better than I could have ever dreamed,” Kirklin said. “They were so versatile in what they played from country to oldies to contemporary pop. The band had everybody on the dance floor from the very first song to the very last song. It never stopped. People were steadily on the dance floor every single song. We feel good about that part because it means everybody had a good time.”

Those in attendance had the option of coming for dinner and the concert or just buying a ticket to the concert.

“It is a great event,” attendee David Coulon said. “We’ve been every year. Palmertree Catering does an excellent job. It is always just a great event. [The Downtown Band] have been fantastic. It is probably one of the best acts they’ve had since they started it. It has been real upbeat music, everybody has had fun, been dancing, it has been a good time.”

The Ritz on the River serves as a night out for the community, but it also has the added benefit of serving as a showcase for the VCC. Among the attendees Thursday evening were 10 meeting planners who are considering hosting their events in Vicksburg.

“They have not stopped raving about it and they have already been in contact with Elyce [Curry] our sales manager about events for 2018,” Kirklin said. “It speaks volume because they can see what we do ourselves. The get to see what we can offer for food.”

Kirklin added that the evening would not have been possible without the sponsors from throughout the community.

“It was unbelievable,” she said.