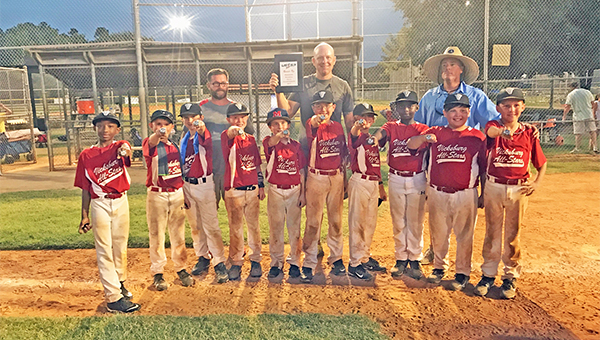 It would have been easy for the players on the Vicksburg 9-under all-star baseball team to give up on themselves.

They went 0-2 and were eliminated in the first tournament of the year, and then their other tournaments before the state finals were rained out. Regardless of the challenge, they persevered through, and they came home for the USSSA State Tournament as the runners-up in the 9-under all-star division.

The team was made up of players who played in the Vicksburg rec baseball league.

“From the beginning of the all-star team practices up until the final tournament, these kids just continued to evolve,” head coach Chris Maxwell said. “They continued to try. They continued to make themselves better. They were probably the most coachable group of kids that I’ve coached.”

Vicksburg was one of 10 teams in their division at the state tournament, and they battled through pool play and a bracket to advance to the finals.

“We won both our pool play games and that gave us the second seed going into the bracket play,” Maxwell said. “We won our first game on that Saturday and then we had to come back Sunday to defend again. We played Sunday morning and won that game and then we went to the semifinals.”

The semifinal game proved to be the toughest of the tournament as it was played in the heat of the middle of the day.

“The kids were dehydrated, they were tired and they fought through it, played their hearts out and that took them into the championship game,” Maxwell said.

They took an early lead in the championship game, but couldn’t hold on and ended up falling 11-10 to finish as state runners-up.

“They only had a few weeks to play together going into this tournament,” Maxwell said. “The chatter around the tournament was who is Vicksburg. They didn’t expect  us to be around after the first cut. We did so well actually that during the championship game a couple of the coaches from the other teams we beat came back to watch us play and cheer us on.”