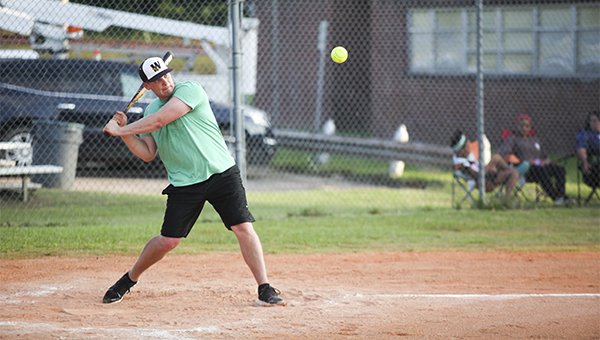 The players in the Vicksburg men’s competitive softball league come from every walk of life, but they all come out on Tuesday nights for the same reason.

“The family atmosphere,” Jimmy Grace who coaches the Vicksburg Mets said. “Being around each other and sharing the time as well as the patience with having to play the game we love.”

Eight teams are playing in the league this year, which is played Tuesday evenings at the Vicksburg City Fields.

The players’ sons and daughters play outside the fence while the game is going on and family members sit in the stands cheering the players on.

“It is not very serious, there is a whole lot of fun involved,” Stephen Purvis who plays for The Buck Stops Here said. “You bring your family out, kids run around and have a good time. Kids are on the sides of the fence throwing all kinds of balls.

The league is called the competitive softball league, and the players say that while they are having fun, the games get pretty competitive.

“It is real competitive,” Grace said. “It is more competitive than you think it is. It is taking time out of the day to do something you love so you want to take pride in it so we do. We take it serious, as well as have fun, but the only way you are going to have fun is to win.”

Corey Jones who plays for the Jager Bombers added, “Nobody likes to lose. It doesn’t get fierce. We all realize what we are doing, but it is pretty competitive.”

Many of the players have a background in baseball, but getting used to playing slow pitch softball can be an adjustment for even the best of them.

“It is different, I have seen guys come out here that did excellent and played college ball and couldn’t hit a softball worth a dang,” Taylor Rushing who plays for The Buck Stops Here said. “Some people have it and some people don’t.”

The hardest adjustment for many of them is going from hitting a hard thrown baseball to a lobbed softball.

Once they find their swing the ball starts flying so each team is given a limited number of home runs per game.

“Most of us are high school baseball players,” Purvis said. “Everybody gets out of high school, some of us are good enough to play in college and some of us aren’t. The people that aren’t come out here and play softball.”

Instead of playing a specific number of innings, each game has a 60 minute clock and ends when the inning that the clock runs out during comes to an end.