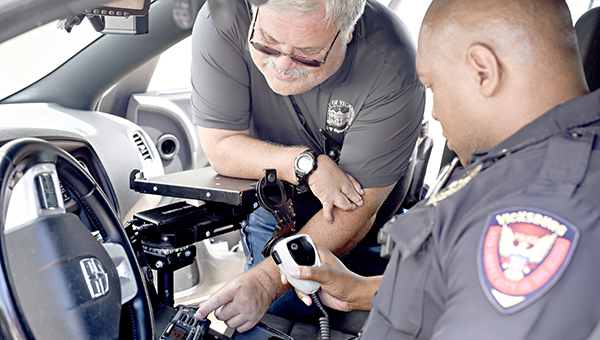 First responders and emergency management officials in Warren County are calling the recent move to a new radio system a marked improvement over the antiquated communications system operated by the city and county.

In a joint move, Warren County and Vicksburg officials split the costs of the $6.25 million upgrade, which puts the city and county on a digital system connected to the State of Mississippi’s MSWIN statewide radio network, which allows communications with any state, county or city department anywhere in the state.”

“It is a wonderful radio system; I have not heard any complaints,” Warren County Emergency Management director John Elfer, who was the county coordinator for replacing the system, said. “It replaced the outdated, and soon to fail, 800 (megahertz) trunk system.

“This will not only communicate with the city and the county, but also other jurisdictions around the state. It’s enhanced our emergency communications system; it’s just wonderful. A wonderful system.”

County fire coordinator Jerry Briggs called the new radios “a big improvement over what we had. We’re very pleased. It has done a lot for our coverage.”

The events leading to the new system go back about eight years, when city and county officials learned the system they had been using for the past 20 years had become outdated and no longer serviceable.

“When we installed that system 20 years ago, it was the first one of its type anywhere in the country with the features it had,” said city IT technician Bill Ford, who handled the city’s end of the upgrade.

“It served us well, but about eight years ago, we received notice from Motorola that in the future they would no longer support it, which meant we couldn’t get parts, and the people who could support it had already left the company.”

“We spent a lot of time out on the open market looking for parts,” said Billy Gordon, the former city IT director who is now a consultant to the city.

At that time, Ford said, city officials began looking for a new system. At the same time, he said, the state inaugurated the MSWIN System, which was developed in the wake of communications problems caused by Hurricane Katrina, and invited local governments to participate.

“We planned for a number of years (to join MSWIN),” he said. “First it was just the city, then we worked with the county, because we were using the same radio system.”

“If we had meetings or we had installs, I helped coordinate that,” Elfer said. “I got all the agencies together and was the liaison between Motorola and the county. I kept the Board of Supervisors informed and made sure the users had all they needed and were satisfied.”

Although initial plans were to have the system installed by the first part of 2017, the project was delayed and went into effect May 23. “Interestingly, some of the setbacks we had forced us to rethink what we were doing; we actually ended up with a better system,” Ford said.

Those changes, he said, saved the city and county money, and the county was able to purchase radios for the volunteer fire departments.

“We made the biggest leap of anyone in the county,” Briggs said. “We went from analog to digital. It has made a big difference.”

“We put those three sites back in at different locations,” he said. “There are two MSWIN sites already in Warren County which gives us a total of five sites in Warren County, plus another nine in adjacent counties, so we can access 14 (repeater) sites. It gives us walkie-talkie (portable radio) coverage anywhere in the county, which we didn’t have before.

“An officer, firefighter or an ambulance crew can pickup a portable radio anywhere in the county and talk back to dispatch.”

Another advantage is interoperability channels or talk groups. Talk groups allow authorities in Vicksburg or Warren County to talk with agencies on MSWIN anywhere in the state.

Soon after the system was implemented here, Ford said, Warren County Sheriff Martin Pace and several deputies filling in for Lincoln County deputies attending a funeral for a fallen officer were able to communicate with other agencies using talk groups.

The system here, he said, is on 800mhz, because that frequency was already in use by the city and county. Other users on MSWIN are on 700mhz.

The move to the new system had one drawback. It forced officials to have to replace every radio in the system older than four years.

Ford said about 75 to 80 percent of the radios in the city and the county had to be replaced because of the old radios’ (frequency) modulation.

“We’ve got superb coverage,” he said. “It took so long because we wanted to make sure we did it right, and a lot of people had questions. Anytime you ask the people responsible for money, ‘I want $6.25 million,’ they’re going to think about it real hard. But we’ve got it for another 20 years — or more.”