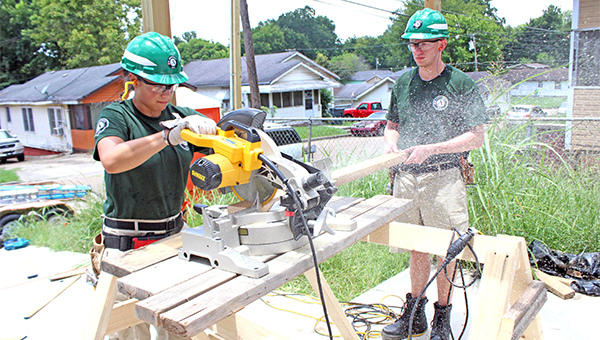 “We’re teaching them about construction safety so they can train their team members when they arrive,” said Abraham Green, Warren County Habitat for Humanity executive director after he finished talking to a group about using a circular saw.

He said the training program was an idea suggested by contractor Bob Moss, who is the secretary for the Habitat Board of Directors.

“AmeriCorps does a lot of volunteer work with us, so it seemed like a good idea,” Green said. “They asked us to help, and we had those two homes (under construction) on Roosevelt Street, so we just arranged our scheduled and went on.

“Rev. Minor retired from Grand Gulf, where he was a maintenance supervisor, so it was good to have him with us,” Green said.

Green, Moss and Habitat chairman the Rev. Mincer Minor worked with the team leaders, teaching them about power tool safety and giving them detailed instructions on how to use a variety of power tools, hand tools and ladders.

After providing basic information on construction site safety, the team leaders rotated in groups through each station to use various hand and power tools and learn their purpose. They also learned how to hang and secure dry wall during their time at the homes.